The Blue Jays have grabbed the first notable starting pitcher of deadline season, acquiring righty Taijuan Walker from the Mariners in exchange for a player to be named later. Both clubs have announced the trade. The PTBNL, per The Athletic’s Ken Rosenthal (Twitter link), is someone not currently in Toronto’s 60-man player pool.

To make room for Walker on the 40-man roster, the Blue Jays transferred righty Trent Thornton from the 10-day injured list to the 45-day injured list. He’d been diagnosed with loose bodies in his right elbow and will now miss the remainder of the 2020 season. 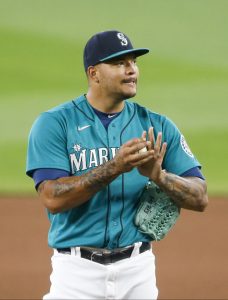 Walker, who turned 28 earlier this month, was the No. 43 overall draft pick by the Mariners back in 2010 and spent six years in the organization before being traded to the D-backs in the 2016-17 offseason. He returned to Seattle on a one-year, $2MM deal this season after missing the vast majority of the 2018-19 seasons in Arizona due to injury. That figure is prorated to about $720K in the shortened season, with about $344K of that sum yet to be paid out. Presumably, the Jays are on the hook for that portion of the deal.

Though the reunion was short-lived, Walker looked plenty healthy in his five starts to begin the season. He’s pitched to an even 4.00 ERA with a 25-to-8 K/BB ratio, five homers allowed and a 36.8 percent ground-ball rate. Walker’s most recent outing saw him hold a tough Dodgers lineup to three runs — all solo homers — on four hits and a walk with eight punchouts over seven frames. He’s averaged 93 mph on his heater thus far in 2020, and that number has crept upward of late; Walker sat at 92.6 mph as recently as July 31 but averaged 93.3 mph in his two most recent outings.

Seattle GM Jerry Dipoto said in a radio appearance on 710 ESPN Seattle (Twitter link via 710’s Jessamyn McIntyre) that he hopes to eventually discuss another reunion between the Mariners and Walker. Given Walker’s status as a pending free agent and the Mariners’ distance from postseason contention, however, the move was widely expected. Dipoto added that he’s happy to send Walker somewhere that he’ll have the opportunity to pitch in the postseason.

The Jays will add Walker to a rotation that recently lost Nate Pearson to an elbow injury and has generally struggled beyond top starter Hyun Jin Ryu. Veterans Matt Shoemaker and Tanner Roark have matching 4.91 ERAs — each with an FIP greater than 6.00. Righty Chase Anderson has been solid in a tiny sample, but he only just returned from an oblique injury and has yet to top five innings in a single appearance this year. The Jays have ridden an unexpectedly strong bullpen into the AL Wild Card mix, but it’s been clear that rotation upgrades would be needed for the team to hang onto that opportunity.

General manager Ross Atkins made that much clear a week ago when he acknowledged his plans to focus on win-now moves — specifically those that would reinforce his team’s starting pitching. The Jays were also recently linked to Pirates righties Trevor Williams and Chad Kuhl, and it stands to reason that they could yet look into acquiring another starter. For now, Walker represents an affordable rotation upgrade who could conceivably make six or seven starts over the final 32 days of the regular season. He’d likely factor into the club’s playoff rotation as well, should the Jays ultimately qualify.

Onlookers may be a bit surprised to see the return as a PTBNL not in the Blue Jays’ 60-man player pool, although that hardly means the Mariners’ return will be negligible. No team can fit all of its noteworthy prospects into the 60-man pool, of course, particularly given that most clubs — contenders in particular — have some of those slots allocated to veteran depth pieces. (Toronto, for instance, has Ruben Tejada, Caleb Joseph, Jake Petricka and Justin Miller in its pool.)

Furthermore, the expectation throughout the industry has been that the return for rental players such as Walker will be even more tepid than usual in a given season. Clubs are typically reluctant to part with high-end prospects even for a full two-month rental of a player in a 162-game season, and parting with notable prospect(s) for half that time is obviously an even tougher sell.

That’s not to say the return for Walker will be negligible. He was among the likeliest pitchers to change hands and surely drew interest from virtually any contender in search of rotation upgrades, so the Jays are presumably parting with a prospect of some note to acquire him. The likelihood is that said prospect was omitted from the 60-man pool either due to a lack of proximity from the Majors or a current injury.

The player’s identity won’t be formally announced by the team until after the season and might not even be settled upon yet; it’s not uncommon for teams to provide lists from which a trade partner can select a PTBNL. There’s also been some speculation that conditional trades — i.e. the PTBNL is X if acquiring team makes the playoffs or Y if the acquiring team does not — could be of increased popularity given the truncated nature of the current season.