The Rockies will acquire outfielder Kevin Pillar and cash from the Red Sox for a player to be named later and 2019-20 international slot money, Mark Feinsand of MLB.com reports. 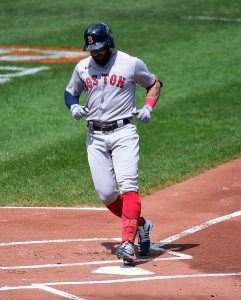 This season has been a major letdown for the Red Sox, but Pillar proved to be a good investment during his month-plus in their uniform. After signing a one-year, $4.25MM contract in the offseason, the former Blue Jay and Giant slashed a respectable .274/.325/.470 with four home runs over 126 plate appearances. Pillar also lined up at all three outfield positions as a member of the Red Sox, though he primarily played right field.

In Colorado, which will enter Monday 17-17 and as a surprising playoff contender, Pillar will hand the club another proven outfielder to join a group highlighted by Charlie Blackmon, Raimel Tapia and David Dahl.

Blackmon has been great this year, Tapia has provided solid production in his own right, and Sam Hilliard has given the club passable numbers. However, the oft-injured Dahl – who has been on the IL for about two weeks – has stumbled, as have the rest of the Rockies’ outfield options. Beyond this year, though, it remains to be seen whether Pillar will stay in Colorado, as he’s slated to reach free agency again over the winter.