TODAY: The Rangers have announced the signing. Dahl will earn $2.7MM in guaranteed money, MLB Network’s Jon Heyman tweets, with another $300K available in salary incentives.

DECEMBER 11: The Rangers and free-agent outfielder David Dahl have agreed to a one-year deal worth approximately $3MM, Jeff Passan of ESPN reports.

Texas will be the second major league franchise for the 26-year-old Dahl, who spent the first several seasons of his professional career as a member of the Colorado organization. Dahl is a former No. 10 overall pick and top 100 prospect who was a successful hitter with the Rockies for most of his time there (which spanned from 2016-20), but after he recorded woeful production last season, the Rockies moved on at the non-tender deadline a week ago. Instead of paying Dahl a projected $2.5MM to $2.7MM for 2021, Colorado cut him loose. 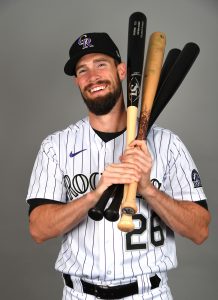 Dahl was just a .183/.222/.247 hitter without a single home run in 99 plate appearances last year, though he entered the campaign with a far more respectable .297/.346/.521 line with 38 HRs over 921 PA. Dahl even earned an All-Star nod in 2019. Of course, there were plenty of health issues that helped stop Dahl from making an even greater impact in Colorado. Rib, foot, ankle and back injuries have limited Dahl to a mere 264 games to this point, including just 24 in 2020, and he has only appeared in at least 100 contests in one season.

While Dahl does come with question marks, this still looks like an interesting buy-low signing on the part of the Rangers. If it works out, they’ll be able to control Dahl via arbitration through 2023. In 2021, Dahl – who has experience at all three outfield positions – should get ample chances to revive his career. Aside from Joey Gallo and Willie Calhoun, who endured their own significant drop-offs in 2020, the Rangers’ 40-man roster is sorely lacking outfielders who have experienced any real major league success.

The Dahl addition makes for the third noteworthy move the Rangers have made since they hired Chris Young as their new general manager on Dec. 4. Young and president of baseball operations Jon Daniels traded right-hander Lance Lynn to the White Sox and acquired first baseman Nate Lowe from the Rays earlier this week.