The Giants have made their previously reported agreement with infielder Tommy La Stella official, announcing on Thursday that he’s been signed to a three-year contract. The deal reportedly guarantees the Beverly Hills Sports Council client a total of $18.75MM, which will be paid out in heavily backloaded fashion: $2MM salary in 2021, $5.25MM in 2022 and $11.5MM in 2023. 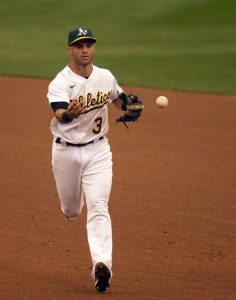 La Stella was the No. 30 free agent on our board early in the offseason, with a projected two-year, $14MM deal ahead of him — a mark he’s surpassed. As for the Giants, their books are almost entirely clear following the 2022 season, where a $13MM club option for Evan Longoria is the only contract currently on the payroll. The $5MM buyout attached to that deal is the only guaranteed money on the books for the 2023 season, so a third year for La Stella is hardly prohibitive, even with the backloaded structure of this arrangement.

La Stella’s story is one of perseverance, as there was a time he considered retirement prior to the 2016 season. Again at the deadline, when the Cubs optioned the then-27-year-old La Stella to Triple-A, he thought about hanging it up rather than continue the grind back and forth between the minors and the Show. He returned, however, to resume his role as a professional pinch-hitter, winning a ring with the 2016 Cubs. When he reached free agency, La Stella looked for an opportunity to play full-time, and he found it with the Angels. He broke out with an All-Star season in 2019 when he slashed .295/.346/.486 with 16 home runs across 321 plate appearances.

He kept it up during the truncated 2020 season, producing 1.2 fWAR and 129 wRC+ that took the shape of a .281/.370/.449 line, solid 11.8 percent walk rate, and minuscule 5.3 percent strikeout rate. Though those numbers came in just 228 plate appearances, the Giants figure they are adding a tough out to the top of their lineup in the form of La Stella, who turns 32 years old at the end of the month.

For the Giants, La Stella fits a need as a left-handed bat that slides into the top of the order. Defensively, La Stella should take over the majority of reps at second base, pushing Donovan Solano back into a utility role. La Stella can also play third base. The Giants can now roll with a starting infield of Brandon Belt, La Stella, Brandon Crawford, and Longoria. Solano, Mauricio Dubon, Wilmer Flores, and Jason Vosler are capable of infield reps off the bench. Buster Posey, if healthy, would figure to spend some time at first base as well. In all, it’s a crowded, if versatile group. It also likely means Dubón spending most of his time in the outfield.

Alex Pavlovic of NBC Sports Bay Area first reported (via Twitter) that the two sides were close to a deal. ESPN’s Jeff Passan added that the deal would be three years in length (Twitter link). MLB.com’s Jon Morosi tweeted that a deal had been reached. The San Francisco Chronicle’s Susan Slusser reported the terms of the deal (Twitter links).