FEB. 4: Cleveland has announced the signing. The deal also includes up to $600K in incentives, Jon Heyman of MLB Network tweets. 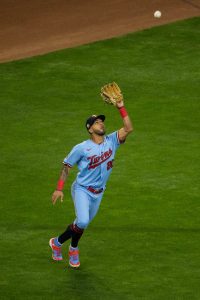 If this deal goes through, it would keep Rosario in the American League Central, where he played with the Twins from 2015-20. Rosario was a three-time 20-home run hitter as a Twin who put up a .277/.310/.478 line over 2,830 plate appearances in their uniform, but the club nonetheless moved on from him after last season. While Minnesota could have kept the 29-year-old for a projected $8.6MM to $12.9MM via arbitration next season, it decided to non-tender him. Rosario then reportedly drew interest from at least a few teams (including the Red Sox, Giants and Brewers) before the Indians landed him.

Cleveland entered the offseason in obvious need of help in the grass, as its outfield finished last in the American League in fWAR with a minus-0.9 fWAR mark in 2020. Their most used holdovers – Oscar Mercado, Jordan Luplow, Josh Naylor and Bradley Zimmer – all endured subpar years, but there wasn’t much expectation the small-budget Indians would sign someone as high-profile as Rosario. They did, after all, start the winter by cutting ties with closer Brad Hand – who had an affordable $10MM option – and they said goodbye to face-of-the-franchise shortstop Francisco Lindor in a trade with the Mets three weeks ago.

Although this has largely been a lean offseason for Cleveland, the team has been busy this week, as it re-signed second baseman Cesar Hernandez before potentially landing Rosario. The latter’s a longtime left fielder who should be the Indians’ top option there, considering Luplow, Naylor and the rest of their choices at the position can’t match his resume.