Veteran left-hander Gio Gonzalez took to Instagram this afternoon to announce his retirement from baseball after a 13-year Major League career. The 35-year-old Hialeah, Fla. native was in camp with the Marlins on a minor league deal and called simply donning the jersey of his hometown club one of his “biggest dreams.” However, Gonzalez also added that his “body wasn’t keeping up with [his] mind.” The lefty offered a heartfelt thanks to the Athletics, Nationals, Brewers, White Sox, Yankees and Marlins organizations. 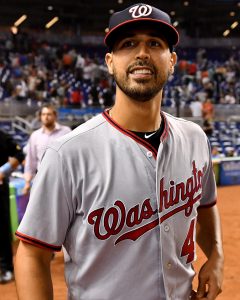 “My heart and mind are finally at peace with my decision,” Gonzalez wrote at the conclusion of his post. “Here’s one last tip of the cap! I’m coming home to my wonderful family. I love u!”

Gonzalez was the No. 38 overall draft pick by the White Sox back in 2004 and had, to say the least, an unconventional career arc with the team. Chicago traded him to the Phillies in Dec. 2005 as part of the Jim Thome blockbuster, only to reacquire him a year later alongside Gavin Floyd in the trade that sent Freddy Garcia to Philadelphia. Gonzalez was close to big league ready at that point and looked as though he could make his debut with the team that originally drafted him … until the White Sox again traded him away — this time to the Athletics as part of the return for Nick Swisher.

Between his draft status, his inclusion in trades for three high-profile big leaguers and his annual placement on Baseball America’s Top 100 prospect list from 2006-09, it was clear that Gonzalez was highly regarded within the industry. It took him a bit to deliver on that talent, but he did so in a big way with a breakout showing in 2010, when he tossed 200 2/3 innings of 3.23 ERA ball and solidified himself as part of the Athletics’ rotation.

That marked the first of six consecutive seasons in which the durable Gonzalez would make at least 27 starts and pitch to a sub-4.00 ERA. Oakland, as is often the case, traded him when he was on the cusp of arbitration eligibility, shipping him to the Nationals in return for a prospect package of four future big leaguers: A.J. Cole, Tommy Milone, Derek Norris and Brad Peacock.

Gonzalez was nothing short of excellent in Washington, finishing third in National League Cy Young voting in his first season as a Nat. He inked a five-year, $42MM contract extension with the Nats in Jan. 2012 and would go on to spend the next seven seasons in D.C. under the terms of that deal (which contained a pair of club options). Gonzalez’s first season with the Nationals was his best, but he finished sixth in NL Cy Young voting in 2017 — his final full year with the club. In parts of seven years there overall, Gonzalez racked up 1263 1/3 innings of 3.62 ERA ball and helped the Nats to four postseason berths.

With the Nats out of playoff contention in 2018, they traded Gonzalez to the Brewers for a pair of prospects. Gonzalez was brilliant in five starts down the stretch with Milwaukee, helping pitch the Brewers into the postseason. He re-signed with the Brewers in April 2019 after being granted his release from a minor league deal with the Yankees organization and again pitched quite well, tossing 87 1/3 frames of 3.50 ERA ball.

In the 2019-20 offseason, Gonzalez had a full-circle moment when he signed a one-year contract to return to the White Sox. He finally took the mound with his original organization on July 26 last summer. Gonzalez was tagged for six runs in his first appearance, but he bounced back with 28 innings of 3.54 ERA ball for the South Siders the rest of the way.

Gonzalez will walk away from baseball as a two-time All-Star who twice finished sixth or better in his league’s Cy Young voting. Long one of the game’s more underrated starters, his career body of work stands as a testament to his consistency: in 1933 innings, Gonzalez went 131-101 a 3.70 ERA and 1860 strikeouts. He earned more than $73MM in a career valued by Baseball-Reference at 30.1 wins above replacement and valued by FanGraphs at 32.1 WAR. Gonzalez never won a ring but appeared in the postseason five different times, made a pair of All-Star Games and was always good for an entertaining interview. It was a strong career by any measure, and Gonzalez will head into retirement having left his mark on several fanbases and countless teammates and coaches around the sport.