The Blue Jays are acquiring reliever Joakim Soria from the Diamondbacks, according to John Gambadoro of Arizona Sports 98.7 FM.  The Jays will send a pair of players to be named later back to Arizona, according to the team.  Outfielder Jonathan Davis was designated for assignment to open a spot for Soria. 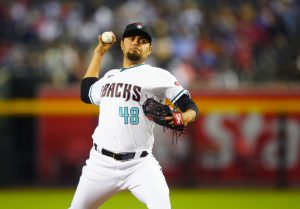 Soria, 37, joins the ninth team of his career.  A legendary closer in his first four seasons with the Royals back in 2007-10, Soria is now more of a useful depth piece.  This year the veteran owns a 4.30 ERA, 24.8 K%, and 6.4 BB% in 29 1/3 innings.  He lengthens a Blue Jays bullpen that also added Brad Hand, Adam Cimber, and Trevor Richards this summer.  Blue Jays Executive Vice President, Baseball Operations & General Manager Ross Atkins saved his big splash for the rotation, acquiring Jose Berrios from the Twins for Austin Martin and Simeon Woods Richardson.

The Blue Jays, who return to the Rogers Centre in Toronto tonight for the first time in 670 days, are currently 4.5 games out of a wild card spot.