THURSDAY, 7:45am: Kevin Acee of the San Diego Union-Tribune reports that Martinez remains a free agent, though sources tell MLBTR that there is no concern the deal won’t be completed after the lockout since an agreement is in place between Martinez and the Padres.  It’s also worth noting that Martinez is set to earn $7MM in 2022, so he’d be leaving three years and $13MM on the table if he decides to opt out.

WEDNESDAY, 9:21pm: The Padres are signing Nick Martínez to a four-year, $20MM contract, reports Jeff Passan of ESPN (Twitter link).  The deal includes opt-outs after the first two years. The right-hander has spent the past four seasons pitching in Japan’s Nippon Professional Baseball. His contract with the NPB’s Fukuoka SoftBank Hawks just expired today, but his representatives worked quickly to find him a big league landing spot before the anticipated transactions freeze.  Martinez is represented by Brian Mejia, Ulises Cabrera, and Alan Nero of Octagon. 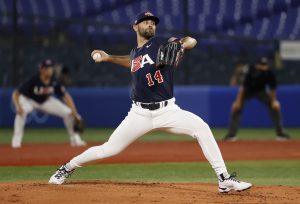 Martínez is making his return to the majors for the first time since 2017, though he did pitch for Team USA in the Tokyo Olympics this summer. The Florida native was drafted and developed by the Rangers, where current San Diego president of baseball operations A.J. Preller was then a prominent member of the scouting department. Martínez debuted in 2014 and worked as a back-of-the-rotation arm for the next few seasons.

Martinez, 31, posted a stellar 1.62 ERA with a 24.8 K% and 6.6 BB% for the Hawks this year in 149 2/3 innings.  According to Sung Min Kim, Martinez’s fastball velocity increased to nearly 94 miles per hour this year, and his changeup has become more effective.  Several American pitchers have revived their careers in NPB or KBO in recent years and returned to MLB on big league deals, including Chris Flexen, Josh Lindblom, Merrill Kelly, and Miles Mikolas.  Martinez’s contract tops all of them, as Mikolas had inked a two-year, $15.5MM deal with the Cardinals four years ago.  Plus, Martinez maintains the ability to re-enter free agency if he’s able to have success in 2022 or ’23.

Martinez’s $5MM AAV is key for the Padres, one of only two teams to exceed the $210MM luxury tax threshold in 2021.  The club is currently in a similar place for 2022, though we don’t know how much success the players’ union will have in increasing the base tax threshold.

Martinez joins a Padres rotation that currently includes Joe Musgrove, Yu Darvish, Blake Snell, and Mike Clevinger.  Chris Paddack, Dinelson Lamet, and Ryan Weathers also figure to be in the mix.  Though that’s significant depth, but it’s plausible that Preller might look to trade someone as a means of clearing payroll.  The Padres already sent Adam Frazier to the Mariners to clear an estimated $7MM or so.

Aside from the Frazier trade, the Padres added to their stock of catchers by acquiring Jorge Alfaro from the Marlins.    They also signed a pair of relievers today in Luis Garcia and Robert Suarez, with the latter having played against Martinez in NPB this year.  There’s a sense that the Padres have plenty of additional offseason moves to make, but like the other 29 teams everything will go on pause until the lockout ends.