The Braves have announced that they’ve signed right-hander Collin McHugh to a two-year deal with a $10MM guarantee. The 34-year-old will make $4MM this year and $5MM next year. There’s also a $6MM club option for 2024 with a $1MM buyout.

McHugh struggled in his first taste of MLB action with the Mets and Rockies, but then established himself as a quality starter with the Astros. From 2014 to 2017, he made 102 starts, throwing 606 1/3 innings with an ERA of 3.70, 22.3% strikeout rate and 6.6% walk rate. In that last year, he missed the first half of the season with arm injuries, but returned in July to make 12 starts and appear in two playoff games out of the bullpen, as the Astros went on to win the 2017 World Series.

From there, McHugh transitioned into a bullpen role and found immediate success, frequently pitching more than one inning. In 2018, he got into 58 games and threw 72 1/3 innings with an ERA of 1.99, 33.2% strikeout rate and 7.4% walk rate. In 2019, he tried returning to the rotation, making eight starts at the beginning of the season. That experiment didn’t go well, as he had an ERA of 6.37 in that time. But after transitioning back to the ’pen, he got things back on track, throwing 33 2/3 innings over the remainder of the season with a 2.67 ERA. 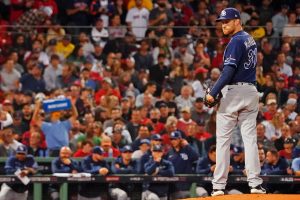 However, despite those positive results, 2019 finished with yet another arm injury as his last appearance was in August. In 2020, he signed on with the Red Sox but the elbow issues lingered and he ended up opting out of the entire season. The Rays signed him to a $1.8MM deal for 2021, which turned into a tremendous bounceback season for McHugh. Despite multiple trips to the IL, he got into 37 games and logged 64 innings with a 1.55 ERA, 30% strikeout rate and 4.9% walk rate.

For the defending World Series champion Braves, their bullpen took a hit at the end of the season, as Richard Rodriguez, Josh Tomlin, Jesse Chavez and Chris Martin hit free agency, with Chavez and Martin both signing with the Cubs in recent days. McHugh will try to compensate for those losses, slotting into the bullpen next to other high-leverage options such as Will Smith, Tyler Matzek, Luke Jackson and A.J. Minter. The club will also be hoping for Kirby Yates, who missed last year due to Tommy John surgery, to join this group at some point.