The Rockies have hammered out another extension, announcing agreement with Kyle Freeland on a five-year contract. The deal reportedly guarantees the MSM Sports Management client $64.5MM and comes with a vesting player option for the 2027 campaign. If Freeland tosses 170 innings in 2026, he’ll trigger a $17MM player option for a sixth season. 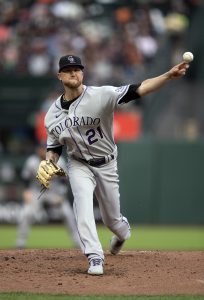 The deal evidently came together quickly, as Freeland told Nick Groke of the Athletic just last week there’d been “no movement” on an extension and that the club hadn’t put forth an offer. Within a few days, he and the team agreed to a long-term deal that figures to keep him around for at least an additional three seasons. It’s a particularly nice development for Freeland, a Denver native and career-long member of the organization.

Colorado selected Freeland with the eighth overall pick of the 2014 draft out of the University of Evansville. He was regarded at the time as a possible mid-rotation starter who could move through the minors quickly based on his polished strike-throwing ability. That projection more or less proved to be the case, as he was in the majors two and a half years later after performing well in the minors.

Freeland stepped immediately into the Colorado rotation, starting 28 of his 33 appearances as a rookie. He posted a 4.10 ERA in 156 innings that season, overcoming a mediocre 15.6% strikeout rate with an excellent 53.9% ground-ball percentage. The southpaw followed that up with a stellar sophomore campaign that has been the best season of his career to date. He made 33 starts and tossed 202 1/3 innings in 2017, posting a 2.85 ERA despite starting 15 games at the most hitter-friendly ballpark in the league. That mark still stands as the lowest single-season ERA for a qualified starter in Rockies’ history, offering plenty of evidence that Freeland could thrive despite the environmental challenges inherent for a Colorado pitcher.

Four years later, the Rox are presumably still placing a lot of emphasis on that showing. Freeland struggled mightily in 2019, allowing a 6.73 ERA. Colorado even optioned him to Triple-A Albuquerque for a month and a half that year. Over the past two seasons, he’s been solid but unspectacular, posting a matching 4.33 ERA in both 2020 and 2021.

Freeland’s general profile — few strikeouts or whiffs offset by plenty of grounders and plus control — hasn’t much changed throughout his time in the majors. Yet since his excellent 2018 showing, he owns a 5.32 ERA in 304 2/3 innings (including two starts thus far in 2022). Colorado surely considers the 2019 season an outlier, but even going back to the start of 2020, Freeland’s 200 1/3 innings of 4.58 ERA/4.65 FIP ball are more fine than exceptional.

The Rockies clearly believe the 28-year-old (29 next month) is capable of a return to something more closely approximating his early-career form. It’s the continuation of a pattern for general manager Bill Schmidt and his staff, who have worked diligently to keep many of the team’s veterans around for the long haul. Within the past eight months, Colorado has worked out multi-year extensions with Antonio Senzatela, Elias Díaz, C.J. Cron, Ryan McMahon and now Freeland. Those players join marquee free agent pickup Kris Bryant and staff ace Germán Márquez as the long-term core in Denver.

Márquez, Senzatela and Freeland are each under club control through at least 2024, leading a rotation the Rox envision as the backbone of the club. Senzatela’s October extension — a five-year, $50.5MM guarantee that contains a 2027 club option — is the most recent deal for a starter with between four and five years of service time. Freeland’s contract tops that of his teammate even though he’s nearly two years older and has been less effective over the past couple seasons. Freeland and Senzatela are similar pitchers stylistically, but the former has been a bit more home run prone and had an ERA about two tenths of a run higher (4.33 for Freeland, 4.11 for Senzatela) between 2020-21.

That’s not to say Senzatela fared poorly. His deal was generally regarded as a player-friendly pact at the time it was signed. Setting aside Jacob deGrom, the previous pitcher to sign an extension in that bucket was Cubs righty Kyle Hendricks. He signed a four-year, $55.5MM pact in March 2019. Like Freeland, Hendricks was headed into his age-29 season and thrived on his control and ground-ball propensity. The Cubs’ starter had posted five straight sub-4.00 ERA campaigns to open his big league career, though, making him a safer long-term bet than either of Colorado’s pitchers.

The Hendricks comparison makes the Rockies’ decision to commit $64.5MM to Freeland puzzling, although it’s not especially surprising. Colorado brass has shown repeatedly they value their own players more than many outside the organization might. While it has been some time since Freeland’s excellent first two seasons, he has shown himself capable of thriving despite the unique challenges the Rockies face at Coors Field. That’s no doubt of appeal to team brass, and the extension comes with the ancillary benefit of avoiding the hassle of an arbitration hearing.

Prior to today’s agreement, the team and player were set for a hearing next month to determine his 2022 salary. Freeland had filed at $7.8MM; the Rockies had countered at $6.425MM. They’ll settle a bit shy of the midpoint for this season and price in a raise for what would’ve been his final year of arbitration-eligibility before paying $15-16MM annually for what would’ve been his three free agent seasons.

The Rockies’ 2022 payroll isn’t much affected by today’s extension, but they’ll add another notable salary to the books for next season and beyond. Colorado’s 2023 player tab now checks in around $110MM, per Jason Martinez of Roster Resource, while Freeland ($15MM), Bryant ($28MM), McMahon ($12MM) and Senzatela ($12MM) all have notable 2024 salaries. Márquez has a $16MM club option that year. The Rockies have never eclipsed $150MM in Opening Day payroll, but they might be headed towards that mark in the next couple seasons. They’ll hope to build around the core in which they’ve invested in an ever-competitive NL West.

Jeff Passan of ESPN first reported the Rockies and Freeland had agreed to a five-year, $64.5MM deal, as well as the sixth-year option. Jon Heyman of the New York Post reported it was a $17MM vesting option, which Danielle Allentuck of the Colorado Springs Gazette reported Freeland needs 170 innings pitched in 2026 to trigger. Ken Rosenthal of the Athletic reported Freeland could opt out after 2024 with a top-five Cy Young finish in either of the next two seasons. Thomas Harding of MLB.com was first with the full breakdown of terms.