The Braves have moved swiftly to lock up yet another budding star on a contract extension, announcing on Tuesday night that they’ve signed rookie center fielder Michael Harris II to an eight-year, $72MM contract spanning the 2023-30 seasons. The contract contains club options for the 2031 and 2032 seasons as well. 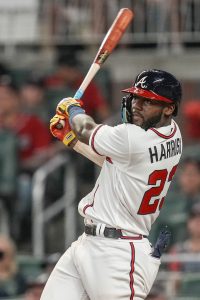 Harris, a frontrunner to finish in the top two of National League Rookie of the Year voting — perhaps alongside teammate Spencer Strider — would’ve been a free agent after either the 2027 (with a top-two Rookie of the Year finish) or after the 2028 season but will instead forgo a trip to the open market in his mid-20s to sign a long-term pact with his hometown team.

The eight-year pact continues an aggressive trend from an Atlanta front office that has been unafraid to pay sizable sums to its young stars early in their careers. Outfielder Ronald Acuna Jr. (eight years, $100MM) and second baseman Ozzie Albies (seven years, $35MM) both signed early, very club-friendly extensions that included a pair of club options beyond their guaranteed years. Acuna’s deal, like the one being discussed with Harris, was agreed upon before he even had a full year of Major League service time.

More recently, the Braves inked Matt Olson to an eight-year, $168MM extension the day after acquiring him in a five-player blockbuster with the A’s. And, this past summer, while so many teams were focused on the trade deadline in late July, the Braves hammered out a ten-year, $212MM extension for third baseman Austin Riley (before also making a handful of trades themselves, of course).

Harris, 21, was the No. 98 overall pick in the 2019 draft and bolstered his prospect stock with a torrid race through the minors that culminated in him skipping Triple-A entirely earlier this year. Despite being promoted right from Double-A, Harris hasn’t missed a beat in the Majors. He’s logged 268 plate appearances in the Majors, tonight’s performance included, and turned in a robust .287/.325/.500 batting line with a dozen homers, 14 doubles, two triples and 13 steals (in 13 tries). Couple that production with plus center field defense (5 Defensive Runs Saved and Outs Above Average alike), and it’s easy to see how the Braves have quickly become enamored of the dynamic young outfielder.

As with any extension for a young player, there’s certainly some risk to both sides. Harris has but 71 games of big league experience under his belt with no Triple-A seasoning of which to speak. In fact, he played only 43 games in Double-A prior to his promotion. And, as good as he’s been thus far in his big league career, the Braves would surely like to see him improve upon a dismal 3.7% walk rate. He’s currently sporting a .345 average on balls in play that’ll likely drop a bit, although players with Harris’ type of speed (94th percentile sprint speed, per Statcast) can often sustain BABIP numbers higher than the league average.

The risk for Harris, meanwhile, is the same that teammates such as Acuna and Albies took when inking their own deals. He’s locking in a life-changing sum of money, to be sure, but a top-two finish in Rookie of the Year voting would have put Harris on track for arbitration following the 2024 season (or, absent that top-two finish, after the 2025 campaign). As things stand, he could’ve either been a free agent following the 2027 season, heading into his age-27 season, or following the 2028 campaign (when he’d be heading into his age-28 season). Free agents who are that young are the sorts who tend to land decade-long contracts north of $200MM or even $300MM.

Certainly, we can’t know whether Harris will sustain his current pace for a full six years. We see players debut with great fanfare and fade from the spotlight somewhat regularly, and injuries can always impact a player’s development and open-market earning power. Harris is surely aware that any early-career extension like this has the potential to turn into an unmitigated bargain for the team, just as the Braves are aware that Harris isn’t necessarily a lock to cement himself among the game’s elite young outfielders. That’s the balance all teams and players strive to strike in early extensions like this, and it appears that in this instance, the Braves and Harris found a sweet spot that’ll clock in a ways short of the Acuna deal but line up nicely with the recent eight-year, $70MM extension signed by Pirates third baseman Ke’Bryan Hayes.

While these contracts tend to be bargains of significant nature when they hit — as they’ve done near universally for the Braves to this point — it’s also worth pointing out that they do inflate a team’s luxury-tax ledger earlier than might otherwise be the case. A $72MM contract for Harris will give him an immediate $9MM luxury hit (the contract’s average annual value) when he’d otherwise have counted for less than $1MM against the tax line.

Atlanta has a $207MM luxury payroll this year and $128MM already counting against next year’s ledger, and that’s before including a Harris contract or arbitration raises for any of Max Fried, A.J. Minter, Mike Soroka or Tyler Matzek (plus any free-agent or trade additions this winter). The extensions are still likely to be cost-effective moves for the team in the long run, but the Braves will have about $50MM of luxury commitments to Acuna, Albies, Riley and Harris alone next season if this deal indeed goes through.

None of that should serve as a deterrent, of course. Harris looks the part of a budding young star, and pairing him alongside Acuna in the outfield and alongside Acuna, Riley and Albies in the lineup for the foreseeable future gives the Braves the upside of an explosive quartet being controlled at a mere fraction of market value. The reduced nature of their salaries — relative to market pricing — ought to allow the team to continue to invest in free agents to supplement the core, keeping the Braves well positioned to contend in the National League East for the foreseeable future. That Harris grew up in the Atlanta area and attended high school just 37 miles south of Truist Park only makes him all the more marketable to the fan base, and surely only makes tonight’s deal sweeter for the latest homegrown, hometown star in Atlanta.