NOVEMBER 1: The White Sox’ managerial search has reportedly drawn its conclusion, as they’re set to hire a longtime division foe: Royals bench coach Pedro Grifol. A formal announcement is expected later this week. Changes to the coaching staff are also expected on the heels of a disappointing season, though pitching coach Ethan Katz will reportedly remain in his current role. 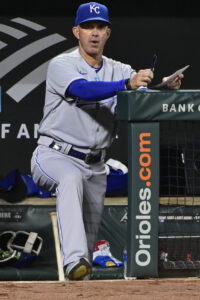 Grifol, 53 later this month, has been with the Royals organization since 2013 and has served as a quality control coach, catching coach and bench coach along the way. He’s also spent extensive time in the Mariners organization, where he spent three seasons as a minor league manager before being named the club’s coordinator of minor league instructor and, eventually, director of minor league operations.

Prior to his work with the Mariners and Royals organizations, Grifol had a nine-year playing career. Selected by the Twins out of Florida State University in the sixth round of the 1991 draft, Grifol spent five seasons as a catcher in the Twins’ system and another four in the Mets’ system. He reached Triple-A with both clubs but never cracked the Majors before ending his playing career following the 1999 season.

While this will be Grifol’s first managerial gig in the Majors, he’s long been seen as a future manager. He also interviewed with the Marlins this offseason and has previously interviewed with the Tigers in 2020, the Giants in 2019 and the Orioles in 2018. Grifol landed a pair of interviews with San Francisco during that offseason’s search and was reportedly among the finalists before the team ultimately chose Gabe Kapler. Grifol was on the Royals’ coaching staff for the organization’s consecutive World Series appearances in 2014-15 — with the latter season, of course, culminating in a World Series victory.

The Grifol hiring comes on the heels of a two-year stint that saw the White Sox bring Hall of Fame skipper Tony La Russa out of retirement to manager the club. That decision was widely believed to have been made directly by owner Jerry Reinsdorf going over the head of his front office, but the hiring of Grifol this time around likely came more directly from the front office. USA Today’s Bob Nightengale tweets that Grifol impressed all parties with the ChiSox and was viewed by Reinsdorf, executive vice president Kenny Williams and general manager Rick Hahn as the best candidate.

Skeptics of the hiring can perhaps point to the fact that Grifol was twice passed over as a managerial candidate by the Royals themselves, though the first time around it appeared as though Mike Matheny was always the clear heir-apparent to Ned Yost upon the latter’s retirement. This offseason, the Royals perhaps simply wanted a fresh voice from outside the organization after an ownership change in 2019, the dismissal of longtime president of baseball operations Dayton Moore and the aforementioned ousting of Matheny. The two clubs are also simply at different points in their competitive cycles and may thusly prefer different traits from their newly minted skippers.

While the Sox also interviewed Yankees bench coach Carlos Mendoza and Astros bench coach Joe Espada and even sat down with Ozzie Guillen about a second managerial stint on the South Side, Grifol will instead get his long-awaited first opportunity. He’ll step right into a win-now club and, given the inflated stated of the ChiSox’ payroll, likely be tasked with overseeing a similar group and coaxing better results than the team mustered in 2022. That’s not to say there won’t be any changes — longtime first baseman Jose Abreu is likely to sign elsewhere, and the Sox have potential needs at second base and in the outfield — but unlike many new skippers who step onto rebuilding clubs, Grifol should be dealt a better hand in terms of the roster he’ll inherit.

ESPN’s Buster Olney and Marly Rivera first reported that Grifol had been chosen as the White Sox’ new manager (Twitter links). Ken Rosenthal of The Athletic first reported that the Sox are expected to retain Katz but make broader-reaching coaching changes.