Jan. 11: The Twins have formally announced Correa’s return. A press conference is set for 11:30am CT.

Jan.  10: Carlos Correa’s unprecedented free-agent saga looks to finally be drawing to a close, and it turns out he won’t even have to look for a new place to live. The former Rookie of the Year and Platinum Glove winner has reportedly agreed to a new six-year, $200MM contract with the Twins, which comes with four additional vesting options that can take the value of the contract to $270MM over a decade-long term. The Boras Corporation client does not have any opt-outs in the contract, though he will receive a full no-trade clause. The deal is expected to be finalized on Wednesday. 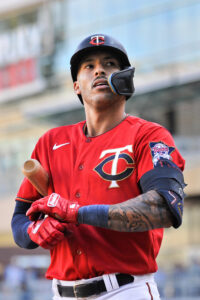 The new deal between the Twins and Correa marks the latest and likely final twist in perhaps the wildest free-agent saga that’s ever played out. Correa, a two-time All-Star, agreed to terms with three different teams on three contracts of $200MM or more this winter — the first two of which were scuttled by concerns over the aforementioned right leg/ankle. Originally, Correa came to terms with the Giants on a 13-year, $350MM deal that blew the runner-up Twins out of the water. However, the Giants postponed Correa’s introductory press conference after raising some eleventh-hour concerns regarding his physical. The Mets, who hadn’t previously been involved in the Correa bidding, swooped in and agreed to a new 12-year, $315MM deal with Correa just days later, but New York raised similar concerns on Dec. 24, following their own physical.

At issue has been concern regarding the stability of Correa’s right leg and how well it will hold up over the life of a long-term deal. Correa sustained a significant fracture when sliding into third base as a 19-year-old prospect in the Astros’ system, which required surgery and the installation of a plate that is still in place to this day. While Correa has never been on the injured list due to the leg in the nine years since that injury, he did at least have a brief scare with it late in the 2022 season.

Correa was thrown out on a hard slide into second base and remained down on the field for several moments before leaving under his own power. After the game, he told reporters that he’d been hit on the plate in his leg and experienced brief numbness and vibration. Correa didn’t miss any time following that incident, however, and he went on to bat .346/.393/.481 with a homer and four doubles in 56 plate appearances from the day of that scare through season’s end.

The manner in which Correa’s leg and its hardware would hold up gave the Mets enough pause that they’re reported to have halved both the length and total guarantee of their original offer. The Mets still offered Correa the ability to match the original 12 years and $315MM they put on the table, but the back half of the contract was conditional and the team ostensibly would not budge from its stance on the matter. Unsurprisingly, Correa took the larger guarantee and considerably larger average annual value presented by the Twins on what is now the largest deal in franchise history.

The offseason leg drama surrounding Correa won’t do him any favors when it comes to shedding the “injury-prone” label that followed him early in his career, but it’s worth pointing out that over the past three seasons, Correa has appeared in 89.1% of his teams’ possible games. Eight of the missed contests in that time came early in the 2022 season with the Twins, when he spent a bit more than a week on the Covid-related injured list.

Nevertheless, all eyes will be on Correa’s leg for the foreseeable future. The uncertainty surrounding it was enough to drop Correa — a player the Twins adamantly maintained they never wanted to lose — back in Minnesota’s lap at a lesser rate than the ten-year, $285MM offer they put forth just one month ago, before he agreed to terms in San Francisco. It’s a stunning turn of events and a major narrative change for a Twins club that had been so focused on Correa in the offseason’s early stages that the majority of impact players were already off the board by the time it looked as though they’d been outbid by San Francisco.

With Correa now likely installed not only for the 2023 season but for the next six years, at the very least, the Twins’ short- and long-term outlooks are radically altered. Correa, who batted .291/.366/.467 with 22 home runs as a Twin this past season will be slotted back into the top third of a lineup that suddenly looks substantially deeper than it did just hours ago. He’ll follow leadoff man and reigning AL batting champ Luis Arraez, with Byron Buxton, Jorge Polanco, Jose Miranda and offseason signee Joey Gallo among the names behind him in the order.

With Correa back in Minnesota, trade acquisition Kyle Farmer will shift back from starting shortstop to the utility role the Twins initially envisioned when acquiring him. Acquired from Cincinnati in November, Farmer is a former catcher who has seen time all over the infield in recent years. He can back up each of Correa, Polanco and Miranda while providing Minnesota with a potent bat against left-handed pitching. Correa’s return allows Farmer to be utilized in more advantageous platoon matchups, one year after the former Red slashed .309/.380/.568 against lefties (but just .235/.291/.320 against righties).

The return of Correa on a long-term arrangement also calls into question just where fellow shortstop and former No. 1 overall pick Royce Lewis might fit into the equation once he’s back to full health. Lewis has been plagued by miserable luck on the health front, tearing the ACL in his right knee two times in just over one calendar year. He recovered from that first ACL tear and burst onto the scene in 2022 with a .300/.317/.550 batting line in his first dozen MLB games — only to suffer that ligament tear while playing in the outfield. The outfield could well end up Lewis’ long-term home, but he could also be considered an option at third base (with Miranda perhaps moving across the diamond) or at second base as an heir to Polanco, who is entering the final guaranteed season of his contract. (The Twins hold a pair of affordable club options on Polanco, however.)

Correa’s $36MM salary (and half the payout on his $8MM signing bonus) bump the Twins’ payroll to roughly $157MM — a franchise record. The Twins have also added Gallo (one year, $11MM) and catcher Christian Vazquez (three years, $30MM) thus far in the offseason — a trio of moves that should upgrade the team’s defense at various key positions. While Correa didn’t match his 2021 Platinum Glove numbers in his first season with the Twins, he’s still generally regarded as a plus defender and ought to stabilize the position with quality glovework for years to come. If a move to another position is ultimately deemed necessary, he has the arm strength for a move to the hot corner, ranking 14th among all Major League infielders (min. 100 throws) in terms of arm strength in 2022, per Statcast.

The addition of Gallo has only made it seem likelier that Minnesota will eventually find a trade partner for Max Kepler, as the Twins are now flush with left-handed-hitting corner outfielders (Kepler, Gallo, Trevor Larnach, Alex Kirilloff, Matt Wallner). Kirilloff could see most of his time at first base, but even still, the Twins have as many as four viable corner outfielders for two spots — and that’s not even factoring in right-handed-hitting bench options like Kyle Garlick and Gilberto Celestino.

It all falls under the “good problem to have” cliche, as the Twins now have a bevy of options in the outfield corners and around the infield, freeing up the possibility to explore trades designed to augment the starting rotation and/or bullpen that might not otherwise have appeared quite so palatable.

Put more simply, while the jarring reunion with Correa will no doubt be regarded as the most substantial move of the offseason, it’s not likely to be the last. While the Twins might have erred toward gearing up for a transitional year in the wake of missing out on Correa, suddenly retaining him on the largest contract in franchise history figures to spur the front office into further activity.