Some notes from the American League:

The Rangers will be without one of their top pitching prospects for all of the 2020 season, as the organization announced Monday that lefty Brock Burke will undergo arthroscopic surgery to repair fraying and a partial tear in the labrum of his left shoulder this week. He’s not expected to pitch again until 2021.

Burke wasn’t projected to crack the Opening Day roster, but he would’ve functioned as a key depth piece for the club’s reworked rotation. He’s already on the 40-man roster and made his MLB debut last August — shortly after his 23rd birthday. Burke struggled in six big league starts (22 runs in 26 2/3 innings), but he posted a 3.90 ERA with 9.2 K/9, 2.6 BB/9 and a minuscule 0.4 HR/9 across three minor league levels last year. The Rangers initially acquired him from the Rays in last offseason’s three-team swap that sent Jurickson Profar to Oakland.

Texas’ offseason acquisitions of Corey Kluber, Kyle Gibson and Jordan Lyles pushed Burke and fellow left-hander Kolby Allard out of the rotation mix early in the season, but both pitchers were one big league injury away from being summoned from Triple-A Nashville to the newly constructed Globe Life Field in Arlington. Earlier this winter, Baseball America ranked Burke 21st among Rangers prospects — the same slot he occupied on FanGraphs’ most recent ranking of the Texas minor league system. He’s generally regarded as a potential back-of-the-rotation starter who gets by with average across-the-board stuff rather than a particular plus offering.

Burke will likely be placed on the 60-day injured list to open a 40-man roster spot at some point this spring, thus positioning him to accrue a full year of Major League service time while he rehabs from Friday’s upcoming procedure. That’s surely not the way that the Rangers would’ve preferred to open a 40-man spot, but the club does have several non-roster invitees in camp who stand a realistic chance of making the team. Matt Duffy, Greg Bird, Sam Travis, Cody Allen, Blake Swihart, Edinson Volquez, Juan Nicasio and Derek Law are among the notable non-roster players in big league camp with Texas in 2020.

In advance of the winter meetings, let’s take a moment to quickly preview a couple teams out west…

8:38 pm: Jeff Wilson of the Dallas Fort Worth Star-Telegram reports that the team has confirmed Burke’s imminent call-up; he will indeed split action on Tuesday with fellow rookie Joe Palumbo (link).

August 16th: The Rangers, seeking a starter for half of their Tuesday doubleheader against the Angels, are considering calling up left-hander Brock Burke, Jeff Wilson of the Forth Worth Star-Telegram reports. It would be the major league debut for the 23-year-old Burke, who’s already on the Rangers’ 40-man roster.

“We’re kind of hoping that Burke would be that day,” manager Chris Woodward said. “We’re still debating it, but I would love to see Burke.”

Burke, who broke into the pros as a third-round pick of Tampa Bay in 2014, is in his first season with the Texas organization. The Rangers acquired him last offseason from the Rays in a three-team trade with the A’s that centered on infielder Jurickson Profar.

While Burke was the Rays’ minor league pitcher of the year in his final season with them, he has endured an injury-shortened 2019. Burke missed a large chunk of time with blister and shoulder problems earlier in the season, though he has pitched to an exceptional 3.18 ERA/2.76 FIP with 9.73 K/9, 2.38 BB/9 and a 50.9 percent groundball rate in 45 1/3 innings at the Double-A level.  The Rangers promoted Burke to Triple-A Nashville earlier this month, but he has only made two starts and combined for eight innings of seven-run, 12-hit ball at that level so far.

Burke currently ranks as the Rangers’ seventh-best prospect at MLB.com, which contends he has the “ceiling of a mid-rotation starter.” He’s unlikely to provide that type of production in MLB right now, though, with Wilson noting that Burke hasn’t amassed more than 88 pitches in an outing this year. Ergo, if Burke does enter the majors in the coming days, his initial stay in the league may not last long. But Burke might be able to push for a rotation spot in 2020, as it’s likely that Mike Minor and Lance Lynn are the lone Texas starters who have clinched jobs for next year (if the club doesn’t trade either of them, of course).

The Rangers swung a trade with the Twins earlier today, and here’s some more out of Arlington…

11:45am: The Rangers are receiving $750K worth of international allotments in the trade, tweets Mark Feinsand of MLB.com.

11:22am: The teams have formally announced the trade. The international bonus allotments that the Rangers are receiving are coming over from the Athletics; the amount was not specified, though international allotments must be traded in increments of at least $250K, per the collective bargaining agreement.

10:15am: The Athletics, Rangers and Rays have reportedly come to an agreement on a three-team trade that will send infielder Jurickson Profar from Texas to Oakland. Yahoo’s Jeff Passan first broke the story. Right-handed reliever Emilio Pagan is headed from the A’s to the Rays in the swap, as is Oakland’s Competitive Balance Round A selection in next year’s draft (currently slotted in at No. 38 overall). The Rangers will send minor league right-hander Rollie Lacy to the Rays, as well. 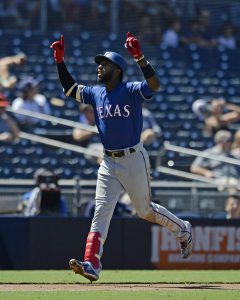 In exchange for Profar and Lacy, the Rangers will receive minor league infielder Eli White from the A’s. Additionally, the Rays will send minor league left-handers Brock Burke and Kyle Bird and minor league right-hander Yoel Espinal to the Rangers. Texas will also receive international bonus allotments in the trade.

Presumably, the trade signals that Jed Lowrie’s time with the Athletics has come to a close. The Oakland infield is currently full with Matt Chapman at third base, Marcus Semien at shortstop and Matt Olson at first base, meaning Profar’s likeliest spot with the A’s will be second base. The addition of Profar also brings into question prospect Franklin Barreto’s immediate future with the organization, as he’d been the presumptive heir apparent at second base in the event that Lowrie signed elsewhere.

Profar, 26 in February, once rated as the game’s top overall prospect but saw is promising future put on hold when a pair of shoulder injuries cost him both the 2014 and 2015 seasons. He struggled in his 2016 return and was a seldom used utility piece in 2017, but Profar finally enjoyed a full, productive season with the Rangers in 2018. Last year, the switch-hitter appeared n a career-high 146 games and tallied a career-high 594 plate appearances, hitting .254/.335/.458 with 20 homers, 35 doubles, six triples and 10 stolen bases along the way.

Because Texas optioned Profar to Triple-A for much of the 2017 season, his overall level of Major League service time was suppressed a bit. As such, he has just under five years of service time, meaning the Athletics will be able to control Profar for both the 2019 and 2020 seasons before he reaches free agency. Profar is projected by MLBTR contributor Matt Swartz to earn just $3.4MM in 2019, so he’ll be an affordable means of filling the team’s second base need for the next two years — a key factor for the perennially cost-conscious A’s, who still need to address their rotation.

The only other Major League piece involved in the trade is the 27-year-old Pagan, who is joining his third organization in three years. He spent just one year in Oakland after being acquired in the trade that sent first baseman Ryon Healy to the Mariners in the 2017-18 offseason. Though he’s moved around a fair bit, Pagan has generally had useful big league results. In 112 1/3 innings a a Major Leaguer, he’s notched a 3.85 ERA with 9.5 K/9 and 2.2 BB/9.

Though Pagan shows good control and is able to miss plenty of bats, however, he’s not without his red flags. The right-hander is among the game’s most extreme fly-ball pitchers and has yielded an average of 1.6 home runs per nine innings at the Major League level — neither of which figures to become any easier when moving to the American League East and its cavalcade of hitter-friendly parks (though Tampa Bay’s Tropicana Field doesn’t necessarily fit that description). For the Rays, the fact that Pagan is well-versed in multi-inning appearances was likely appealing, though. Pagan’s 112 1/3 MLB frames have come across 89 total appearances, and the Rays aggressively lean on multi-inning relievers as part of the burgeoning “opener” strategy that worked quite well for them in 2018.

The 23-year-old Lacy will join the Tampa Bay organization after spending only a brief time with the Rangers. Texas acquired Lacy in the July trade that sent Cole Hamels to the Cubs, though his results with the Rangers dropped off a bit from the numbers he posted in the Cubs’ minor league system. Some of that surely coincides with a move from Class-A to Class-A Advanced, and it’s worth noting that Lacy only totaled 28 1/3 innings in the Rangers’ system before the season ended, so it’s also a small sample of data. On the season as a whole, the right-hander worked to a 2.97 ERA with 10.0 K/9, 3.1 BB/9 and a ground-ball rate of nearly 60 percent through 109 innings between those two levels this season.

Looking to the Rangers’ return, Burke may well be the headliner in the deal. A third-round pick in the 2014 draft, the 22-year-old Burke was the Rays’ minor league pitcher of the year this past season and pitched to a 3.08 ERA with 10.4 K/9 and 2.9 BB/9 in 137 1/3 innings between Class-A Advanced and Double-A. The Rays protected Burke from the Rule 5 Draft last month by selecting him to the 40-man roster, and he’ll now be added to the Rangers’ 40-man in place of Profar.

Bird, 26 in April, split the year between Double-A and Triple-A, where he pitched to a combined 2.39 ERA with 88 strikeouts against 35 walks in 75 1/3 innings of relief work. Like Burke, he was selected to the Rays’ 40-man roster last month, meaning he’ll join the Rangers’ 40-man and give the organization an immediate left-handed bullpen option for the upcoming season. Even if he doesn’t break camp with the club, it seems likely that Bird will get an opportunity at some point in 2019.

The 26-year-old Espinal spent the bulk of the ’18 season in Double-A Montgomery, where he boasted a huge strikeout rate but demonstrated his share of control issues as well. In 54 2/3 innings at the Double-A level, Espinal notched an impressive 1.98 ERA with 11.7 K/9 but 4.8 BB/9 and a below-average 32.2 percent ground-ball rate. He won’t be as immediate of an option as Burke or Bird, but with some Double-A experience already under his belt, he’s likely not that far off from MLB readiness.

White, meanwhile, is the lone piece headed from Oakland to Texas in the swap. An 11th-round pick by the A’s back in the 2016 draft, White took his already-strong OBP skills to new heights in at the Double-A level in 2018. In 578 plate appearances this past season, the second baseman/shortstop hit .306/.388/.450 with nine home runs, 30 doubles, eight triples and 18 steals.

Yahoo’s Jeff Passan reported that Profar had been traded to Oakland and eventually followed up with all of the names and pieces involved in the deal (all Twitter links). USA Today’s Bob Nightengale, The Athletic’s Ken Rosenthal and the Dallas Morning News’ Evan Grant all added some details along the way (all Twitter links).