SATURDAY: Ryan has cleared waivers, and the Angels have outrighted him to Triple-A Salt Lake, Jeff Fletcher of the Orange County Register tweets.

WEDNESDAY: The Angels have activated shortstop Andrelton Simmons after a long layoff for a thumb injury, as MLB.com’s Alden Gonzalez reports on Twitter. To create a roster spot, the club designated infielder Brendan Ryan for assignment.

Simmons had been out since early May after tearing the ulnar collateral ligament in his thumb, which required surgery. It’s certainly positive news that he was able to return earlier than had been expected.

The Halos need Simmons’s glove at short, but even more than that will need him to pick up the pace at the plate upon his return. Over his 118 plate appearances earlier in the year, Simmons posted a weak .219/.246/.281 batting line and managed only a single long ball.

As for Ryan, this is his second trip through DFA limbo with Los Angeles this year. He was added as depth with Simmons and then Cliff Pennington injured. The 34-year-old managed only one hit in 14 plate appearances, though he’ll continue to have a niche role in this or another organization due to his well-respected glove.

The Angels announced today that they have acquired shortstop Brendan Ryan from the Nationals in exchange for cash considerations or a player to be named later. He’ll join the Angels tonight and give them a defense-oriented replacement for the injured Andrelton Simmons, who requires surgery to repair a torn ligament in his thumb and is slated to miss the next six to eight weeks. Right-hander Garrett Richards, who is set to undergo Tommy John surgery, was moved to the 60-day DL to make room for Ryan on the 40-man roster.

Ryan, 34, has spent most of the past three seasons with the Yankees, hitting a combined .201/.244/.271 in a limited sample of 289 plate appearances. (Notably, the trade reunites him with former Yankees assistant GM Billy Eppler, who is now the GM for the Halos.) Ryan has never been much of a threat with the bat, but like Simmons, he’s a very highly regarded defender at shortstop and should at the very least provide the Halos with quality glovework during Simmons’ prolonged absence. Ryan began the season with the Nationals’ Triple-A affiliate, where he was batting .263/.305/.382 with one home run in 83 trips to the plate.

This past offseason, Ryan exercised a $1MM player option with the Yankees but found himself included with Adam Warren in the trade that sent Starlin Castro from the Cubs to the Yankees. Chicago would ultimately release Ryan, who inked a minors pact with the Nationals and (as MASNsports.com’s Mark Zuckerman tweets) nearly made the Major League roster with a fine spring showing. Ryan is a career .234/.295/.315 hitter in 2872 Major League plate appearances with the Cardinals, Mariners and Yankees. He’s logged nearly 5700 innings at shortstop in the Majors and drawn a +99 mark from Defensive Runs Saved. Ultimate Zone Rating, meanwhile, pegs Ryan at +11 runs per 150 games played.

The Nationals have announced the signing of infielder Brendan Ryan to a minor league deal. He’ll receive an invitation to major league camp.

It’s been something of an odd offseason thus far for the 33-year-old veteran, who kicked things off by exercising a $1MM player option with the Yankees. But he found himself dealt to the Cubs along with Adam Warren in exchange for Starlin Castro, only to be released shortly thereafter by Chicago — indicating that the organization took on his salary as part of the financial maneuvering in that swap.

But the Nationals have a history of trusting roster spots to solid veterans, and Ryan could still have something to offer as a depth option in the team’s utility mix. He only slashed .201/.244/.271 while battling injuries over two seasons in New York and has never really done much at the plate. But Ryan rated as an immensely valuable defender when he featured as a regular shortstop and is capable of playing anywhere in the infield dirt.

The Cubs have released infielder Brendan Ryan, the club announced. Ryan was just acquired as a piece of the deal that sent Starlin Castro to the Yankees.

It’s apparent now that Chicago didn’t have much interest in adding Ryan to its roster. Indeed, his $1MM salary may have been moved as part of the balancing of the dollars in the trade.

Soon to turn 34, Ryan is a top-notch defender but has never done much at the plate. He just wrapped up a less-than-inspiring run with the Yankees, only receiving 289 total plate appearances in three campaigns. Ryan hit only .201/.244/.271 in that span.

The Cubs announced on Thursday that they have designated right-hander Yoervis Medina for assignment. Medina’s roster spot will go to infielder Brendan Ryan, who has now officially been acquired as the player to be named later in last week’s Starlin Castro/Adam Warren trade.

Medina’s struggles weren’t confined to the Major Leagues, either. He also recorded 40 innings of Triple-A work between the two teams but limped to a 5.62 ERA with 8.8 K/9 against 5.0 BB/9. Those numbers, clearly, represent a significant departure from his best work at the upper levels of the minors and in the Majors. If there’s no health issue at play — though his diminished velocity certainly stands out as cause for concern — another club may look at him as a low-risk option with four years of club control remaining and hope that he can rediscover the form he displayed in 2013-14. ERA estimators like FIP, xFIP and SIERA were never sold on Medina as a sub-3.00 ERA arm, but all felt that he could hold down a mark somewhere in the mid-3.00 range given his blend of missed bats and grounders.

The Yankees and Cubs have agreed to a trade that will send Starlin Castro to New York, pending medical reviews.  The deal will also see right-hander Adam Warren and Brendan Ryan (listed as a player to be named later) heading to the Cubs. 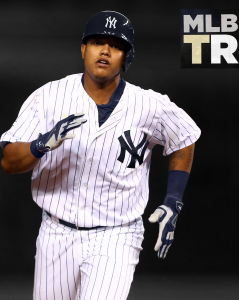 Castro, 26 in March, is a three-time All-Star that struggled mightily for much of the 2015 campaign but had a strong finish to the season and an even better showing in the playoffs. Overall, Castro batted .265/.296/.375 last season, marking the second time in the past three seasons in which he’s delivered a well-below average output on offense. However, the 2014 campaign was excellent, as Castro batted .292/.339/.438 with 14 home runs. The Yankees will be counting on Castro to look more like his 2014 and the late-2015 versions of himself over the course of the next four seasons that remain on his contract.

A total of $38MM remains on the seven-year, $60MM contract extension Castro signed three years ago. With the Yankees, he will, presumably, step in as the everyday second baseman for the foreseeable future. His addition calls into question what the Yanks will do with incumbent second basemen Dustin Ackley and Rob Refsnyder, who had previously been slated to platoon in 2016. While one could remain on the roster as a utility option, it’s tough to envision the club keeping both players and Castro on the active roster next year.

Warren, 28, will give the Cubs a right-hander that was one of the more valuable swingmen in the game last season. The former fourth-round pick appeared in 43 games for the Yankees, making 17 starts and 26 relief appearances en route to a career-high 131 1/3 innings. In that time, Warren posted a 3.29 ERA with 7.1 K/9, 2.7 BB/9 and a 45.2 percent ground-ball rate. Those numbers are more or less commensurate with the production he delivered from 2013-14 while working almost exclusively out of the bullpen (101 relief appearances, two starts) and can be a reasonable expectation for him going forward. (If anything, one could perhaps forecast slightly better results due to the move to the National League.) He can be controlled for another three years in arbitration.

Ryan, 34 in March, exercised his $1MM player option this offseason. Ryan has not been terribly productive since coming to New York, taking just 289 plate appearances and compiling a poor .201/.244/.271 batting line over his three years with the team. Still, he is valued most for his glove and he can contribute at second base and in other infield roles.

Joel Sherman of the New York Post (on Twitter) and ESPN’s Buster Olney (on Twitter) first reported that Castro was New York-bound.  YES Network’s Jack Curry (Twitter link) reported that Adam Warren and a PTBNL were going to the Cubs.   Jon Heyman of CBS Sports tweeted that the PTBNL was Brendan Ryan.  Photo courtesy of USA Today Sports Images.