The Twins have acquired left-hander Jeremy Bleich from the Red Sox in exchange for cash considerations, as tweeted by Nate Rowan, the director of communications for the Twins’ Triple-A affiliate in Rochester.  Bleich will be assigned to Rochester.

Bleich signed a minors deal with Boston in April, and has posted an 0.71 ERA in 12 2/3 innings at low-A ball along with a 5.59 ERA over 19 1/3 frames for Triple-A Pawtucket.  These represent the latest stops in an 11-year pro career for Bleich, who was originally selected 44th overall by the Yankees in the 2008 draft.  Minnesota will be the seventh different organization Bleich has called home, and his long resume includes a cup of coffee in the majors, appearing in two games (and pitching a total of one-third of an inning) for the Athletics just last season.

Plouffe, 32, was the Twins’ primary third baseman from 2013-16 and provided a solid bat with some pop for them during that time. However, he’s struggled with the A’s, Rays and Phillies across the past two seasons, hitting a combined .200/.271/.325 with 10 homers in 325 trips to the plate. He’s picked up some experience playing first base in recent years and has traditionally been a strong right-handed bat against left-handed opponents. In 27 spring plate appearances, Plouffe collected five hits (two homers, two doubles) and drew four walks.

Petit is a more versatile infielder, capable of playing both middle-infield slots, but he doesn’t have near the track record that Plouffe carries. Another former Twins/A’s infielder, the 34-year-old Petit is a career .249/.294/.342 hitter in 493 plate appearances. He went 4-for-15 with the Phils in his limited time in camp.

Paredes, 32, appeared briefly with the Dodgers in both 2017 and 2018, pitching a combined 16 innings with a 4.50 ERA but an outstanding 19-to-2 K/BB ratio. He’s been an extreme fly-ball pitcher in Triple-A and particularly in his limited big league time. Paredes was lights-out in camp, tossing 6 1/3 innings without allowing an earned run while recording an 11-to-2 K/BB ratio.

Bleich made his big league debut last season at the age of 31, though he faced only four batters (retiring one of them). A supplemental first-round pick by the Yankees back in 2008, Bleich is a 10-year minor league veteran with a career 3.64 ERA at the Triple-A level. In nine spring innings, Bleich allowed three runs on six hits and seven walks with 11 strikeouts.

The A’s have acquired right-hander Mike Fiers from the Tigers in exchange for cash considerations or two players to be named later, the team has announced (Twitter link).  Left-hander Jeremy Bleich has been designated for assignment to create room for Fiers on Oakland’s roster.

Fiers drew attention from multiple clubs prior to the trade deadline, with the Athletics reportedly making a strong bid to land the 33-year-old on deadline day itself.  Less than a week later, the A’s finally landed the righty to help reinforce its injury-plagued starting staff, with Susan Slusser of the San Francisco Chronicle reporting that Oakland put a claim on Fiers while he was on revocable trade waivers. 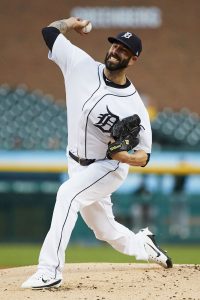 After being non-tendered by the Astros last winter, Fiers signed a one-year, $6MM deal with the Tigers and did a solid job of rebuilding his stock after a rough 2017 season.  Fiers posted a 3.48 ERA, 6.58 K/9, and 3.35 K/BB rate over 119 innings (21 starts) for Detroit, and has been particularly effective after a slow start to the season, as Fiers has a 2.57 ERA over his last 70 frames.

There are some red flags about his performance, however, most notably the career-low (over a full season) strikeout rate and swinging strike rate (8.3 %).  Fiers is getting away with allowing some hard contact, as evidenced by the gap between his .321 wOBA and his .345 xwOBA, and he has also benefited from an 83.1% strand rate and a .277 BABIP.  Advanced metrics such as FIP (4.66), xFIP (4.82) and SIERA (4.54) all sit over a run higher than his real-world ERA.

Even if a bit of regression is in order, Fiers will likely still represent an upgrade for an A’s rotation that has posted middling numbers over the course of the season (though they have been dominant as of late).  Fiers joins ace Sean Manaea and veterans Brett Anderson, Edwin Jackson, and Trevor Cahill in the Athletics’ starting five, and Fiers is also an option for the 2019 staff, as he is controlled via salary arbitration.  It’s worth noting that Fiers left his last start after just two innings after being hit in the shin with a line drive, though the injury isn’t thought to be particularly serious, and obviously the A’s weren’t concerned enough to hold off on making the trade.

As per Slusser, the Tigers have the option of taking money back for Fiers, or selecting two names from a list of prospects.  It’s safe to assume that none of Oakland’s top minor leaguers are on that list, though Detroit should still get some kind of decent return on their $6MM investment in Fiers in the offseason.

Bleich made his Major League debut this season, appearing in two games for the A’s though getting through just one-third of an inning.  A supplemental first-round pick (44th overall) for the Yankees in the 2008 draft, Bleich has pitched for five different organizations over 10 professional seasons and he also played for Team Israel in the 2017 World Baseball Classic.  Bleich has a 3.92 ERA, 7.2 K/9, and 2.06 K/BB rate over 601 1/3 career minor league innings.