2:37pm: The A’s have now announced that both Smolinski and Kiekhefer were outrighted, and the organization further announced that right-hander Chris Hatcher has been outrighted off the 40-man after clearing waivers as well.

12:37pm: Outfielder Jake Smolinski and left-hander Dean Kiekhefer have both been outrighted off the Athletics’ 40-man roster after clearing waivers, per the MLB.com transactions page. Smolinski has already elected free agency, I’m told, and it seems likely that Kiekhefer will do so as well, as is commonplace in these scenarios.

That production isn’t particularly eye-catching, but the right-handed-hitting Smolinski has been a menace in platoon settings, hitting .282/.351/.473 against left-handers to this point in his career. Defensively, Smolinski has experience at all three outfield positions and has played anywhere from average to slightly above-average defense, per Defensive Runs Saved and Ultimate Zone Rating. He’d been arbitration-eligible for the A’s, albeit with a modest projection of an $800K salary, per MLBTR contributor Matt Swartz.

As for Kiekhefer, the 29-year-old southpaw pitched just two innings for the A’s in 2018 but enjoyed a strong minor league campaign between the Reds and A’s organizations. In 58 1/3 minor league frames, Kiekhefer posted a 3.39 ERA with a terrific 51-to-8 K/BB ratio and above-average ground-ball tendencies. Left-handed opponents posted a .224/.263/.346 slash against him between the Majors and minors this season.

Kiekhefer’s big league experience is limited to 24 innings of 6.38 ERA ball between St. Louis (in 2016) and Oakland, but he’s turned in 204 innings of 3.03 ERA ball with 7.0 K/9 against 1.7 BB/9 in parts of five seasons at the Triple-A level. Given that track record, he should have little difficulty finding interest as a minor league free agent this offseason.

The Athletics announced an avalanche of September 1st roster moves. The club has designated catcher Bruce Maxwell for assignment. Meanwhile, righty Josh Lucas and outfielder Boog Powell have cleared waivers and have been outrighted to Triple-A. Kendall Graveman was also recalled in order to be placed on the 60-day disabled list. Those four moves made room for the four contracts the A’s selected today; left-hander Dean Keikhefer, right-handers Chris Hatcher and Liam Hendriks, and catcher Beau Taylor, who will be making his first appearance in the major leagues.

Maxwell is probably the most notable player on this list, though certainly more for his non-baseball publicity than any actual merit in his gameplay. The backstop was the first baseball player to join the police brutality protests during the national anthem, a movement that had then been mainly held to NFL circles. More recently, Maxwell was arrested on charges of aggravated assault with a deadly weapon, and disorderly conduct. On the field, he owns a .240/.314/.347 batting line with five homers and a 24.3% strikeout rate.

Lucas, meanwhile, has had a wretched showing with the Athletics at the MLB level. The 27-year-old righty owns a 6.28 ERA across 14 1/3 innings with Oakland, thanks in part to a troublesome 5.65 BB/9. Even in the minors, he’s pitched to a 2.63 ERA but a much less attractive 4.17 FIP while exhibiting the same sort of walk issues. Prior to this season, Lucas had spent the entirety of his career in the Cardinals organization; he was traded to the A’s in exchange for fellow minor-league hurler Casey Meisner.

The 25-year-old Powell hasn’t given the A’s much to be excited about this year, either. He had an excellent showing across 92 plate appearances with Oakland in 2017, when he batted .321/.380/.494 with a trio of homers and average center field defense, but this year has been an entirely different story. Powell’s wRC+ on the year sits at just 28, and his wOBA is an equally poor .211. That’s the result of just four hits (two for extra bases) across 25 MLB plate appearances. Overall, Fangraphs rates his 2018 performance at 0.3 wins below replacement level.

END_OF_DOCUMENT_TOKEN_TO_BE_REPLACED 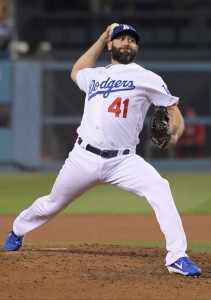 Former All-Star righty Henderson Alvarez put on a showcase yesterday, according to Jon Heyman of Fan Rag (via Twitter). There’s no word yet on how it went, though it’s certainly promising that he was able to take the mound at all. Alvarez, who only just turned 27, is said to be to full health. He last appeared in the majors early in the 2015 season, before a string of shoulder problems intervened. About half of the MLB clubs were represented at the showcase, per Heyman; it’s not surprising to hear of the interest given Alvarez’s young age and track record of success — including a sterling 2014 campaign in which he placed 12th in the NL Cy Young voting.

Here’s more on some injury situations from around the game:

Van Slyke, 30, was limited to 52 games this past season due to back and wrist injuries. When healthy, he batted a disappointing .225/.292/.314 in 113 plate appearances. Van Slyke, however, has a nice track record as a complementary outfielder, having slashed .261/.349/.455 with 24 homers in 651 plate appearances from 2013-15. Most of the damage he’s done in his career has come against left-handed pitching, as he holds a career .845 OPS against southpaws as compared to a .678 OPS against right-handed pitching. MLBTR contributor Matt Swartz had projected Van Slyke for a $1.3MM salary in 2017.