The Korea Baseball Organization’s Nexen Heroes have announced that they have signed former MLB outfielder Jerry Sands (h/t Dan Kurtz of MyKBO.net, on Twitter). He’ll take the roster spot of fellow outfielder Michael Choice, another prior big leaguer, who was released.

As for Choice, a 28-year-old former first-round draft pick, he has struggled through three hundred career MLB plate appearances (.188/.253/.320) but turned in a big 2017 effort after moving to Nexen last year. Unfortunately, he hasn’t matched that productivity thus far in the present season, as he’s carrying a .258/.339/.458 batting line with 17 home runs.

Choice’s stat line may look fairly robust at first glance, but it’s not all that impressive for the notoriously hitter-friendly KBO. The standards are especially high for foreign players, as each team is capped at three apiece. There are quite a few significant performers listed on MyKBO’s foreign-player leaderboard. As Kurtz notes, today’s transaction occurs just before the mid-August deadline for KBO players to add foreign players to their roster who are eligible for postseason play.

Two former big leaguers are extending their stay in the Korea Baseball Organization, as Jee-ho Yoo of South Korea’s Yonhap News Agency writes that outfielder Michael Choice and righty Jake Brigham have re-signed with the Nexen Heroes on a pair of one-year deals. Choice will earn a guaranteed $600K in his second season with the Heroes, while Brigham will earn $650K.

The 28-year-old Choice was the 10th overall pick in the 2010 draft and long ranked as one of the game’s top overall prospects, but never delivered on that billing in the Majors. In parts of three big league seasons with the A’s (who drafted him) and Rangers, he hit .188/.253/.320 in 300 plate appearances.

Choice opened the 2017 season with the Orioles’ Triple-A affiliate and spent time with the Brewers’ Double-A club before joining the Heroes midseason. In 201 plate appearances after moving to the KBO, Choice raked at a .307/.390/.653 clip with 17 homers and eight doubles.

The Indians have acquired outfielder Michael Choice from the Rangers, as T.R. Sullivan of MLB.com first reported on Twitter. Cleveland will send cash considerations to complete the deal, Jeff Wilson of the Fort Worth Star-Telegram tweets.

Choice, 25, was designated for assignment recently to clear space for the Rangers’ acquisition of Will Venable. Once a top-100 prospect, Choice has stumbled since heading to Texas in return for Craig Gentry before the 2014 season. 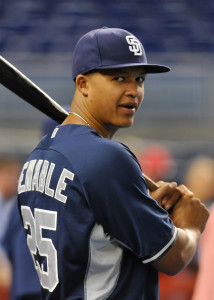 Texas has several irons in the fire. Here’s the latest: