Former Cubs, A’s and Reds infielder Arismendy Alcantara has signed with the Hokkaido Nippon-Ham Fighters in Nippon Professional Baseball, per a team announcement (via Yahoo Japan). It’ll be the first stint in Japan for the one-time top prospect.

Heading into the 2014 season, Alcantara ranked among the sport’s top 100 prospects at Baseball America, MLB.com and Baseball Prospectus (among other outlets). At the time, the switch-hitter was fresh off a 15-homer, 31-steal performance in Double-A as a 21-year-old. Alcantara was viewed as a potential long-term option at Wrigley Field, but he’s yet to find much success at the MLB level.

Alcantara has played all over the diamond as a professional, appearing at every position other than first base and catcher. The vast majority of his work has come up the middle, with 4053 innings at second base, 3311 innings at shortstop and 1207 innings in center field. He’ll give the Fighters some cover at multiple positions, and given that he only recently turned 30, a Major League comeback at some point down the road isn’t out of the question if he takes his game to a new level overseas.

In a move that slipped through the MLBTR cracks, the Mets have reportedly agreed to a minor league contract with IF/OF Arismendy Alcantara.

Alcantara, 27, spent much of 2018 in the Mexican League after being designated for assignment by Cincinnati in late 2017. The versatile Dominican, who’s appeared at six positions during his four-year MLB tenure with the Cubs, A’s, and Reds, figures to be in the utility mix for a Mets club that’s been on a depth-piece binge for the better part of the offseason.

The 5’9 switch hitter burst onto the national prospect landscape after a strong 2013 showing for Chicago’s AA affiliate, slashing .271/.352/.451 with 31 steals in 133 games. A solid follow-up the next season left the then-22-year-old poised to become the charter MLB member of Chicago’s burgeoning minor-league crop, but big-league pitching soon stopped him in his tracks. Alcantara slashed just .205/.254/.367 in his first stint with the Cubs, and never seemed to regain his upper-minors mojo in subsequent demotions to AAA.

The Cubs quickly soured on the switch-hitter: a June 2016 trade sent Alcantara to Oakland, where he received scant opportunity with the parent club. The Reds picked him up the following year, where he scuffled through an injury-riddled campaign before being jettisoned in late summer. Alcantara did show promise in last year’s Mexican League stint, and still boasts considerable upside, given his both-sides power and ability to hold down multiple defensive forts, if he can somehow recapture his mid-decade form.

The Reds have announced that they’ve designated infielder/outfielder Arismendy Alcantara for assignment. The move clears space for righty Scott Feldman, who returns from the disabled list to start tonight against Milwaukee.

Alcantara was once a top prospect who showed good basestealing ability and burgeoning power in the minors, but his stock has fallen in recent years as he’s passed through the Cubs and Athletics organizations. The Reds claimed him from Oakland last October, and he’s batted a very poor .171/.187/.248 (including a 35.2 K% and 1.9 BB%) in 108 plate appearances while playing six positions in the big leagues this season. He’s also out of options, further complicating any hopes the Reds might have had of continuing to carry him on their roster. In parts of four big-league seasons, Alcantara has batted just .189/.235/.315 in 459 plate appearances.

The Reds have claimed infielder/outfielder Arismendy Alcantara off waivers from the Athletics, Cincinnati announced. Fellow utility option Patrick Kivlehan — who was claimed just eight days ago from the Padres — was designated for assignment to clear roster space.

Alcantara, 24, was once one of the more well-regarded prospects in the Cubs’ minor league ranks, but his promising production at Double-A and Triple-A as a 21-year-old and 22-year-old, respectively, hasn’t carried over to the big league level. Alcantara hit .271/.351/.452 with Double-A Tennessee back in 2013 and followed that up with a huge .307/.353/.537 slash with Triple-A Iowa the following season. Both of those impressive stints fueled a promotion to the Majors in ’14, but Alcantara floundered through 300 plate appearances that year, and his bat regressed at Triple-A in 2015. All told, he’s a career .195/.249/.337 hitter through 351 big league plate appearances, though he did post a respectable .278/.325/.467 slash in 108 Triple-A contests this season.

Alcantara has experience playing a slew of positions and can give the Reds another versatile option to move around the diamond. He’s played mostly second base and center field at the Major League level but also has professional experience at shortstop, third base and in both outfield corners.

As for Kivlehan, his stay on Cincinnati’s 40-man roster proved to be brief. The former Rangers/Mariners farmhand was claimed off waivers in late September. In the past calendar year, Kivlehan has been traded from the Mariners to the Rangers, only to be sent back to Seattle before being claimed off waivers by the Padres and later by the Reds. He’ll now potentially land with a fifth organization in the past 12 months. The 26-year-old has just 24 big league plate appearances but is a .282/.344/.470 career hitter in the minors, where he’s played both corner infield positions extensively and has seen limited action in all three outfield slots.

The Cubs have brought back veteran infielder/outfielder Chris Coghlan in a trade with the Athletics, per an announcement from Oakland. Young utilityman Arismendy Alcantara will go back in return. 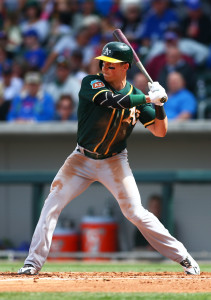 Chicago had shipped Coghlan to the A’s over the winter in exchange for pitcher Aaron Brooks. That move proved to be a precursor to the Cubs’ signing of Dexter Fowler.

In the interim, though, the Cubs lost Kyle Schwarber for the season and recently saw Jorge Soler go down with a hamstring injury of unknown severity. Also hitting the DL with a hammy issue is infielder Tommy La Stella.

Those losses have reduced the club’s depth somewhat, though it still has a nice group of outfield talent in reserve (including just-promoted prospect Albert Almora) as well as a fully healthy infield that includes two outstanding players (Kris Bryant and Ben Zobrist) who are also capable of playing in the outfield.

The 30-year-old Coghlan will likely see time at the corner outfield, but has also been an option at second base (where Zobrist is entrenched). He had two highly productive seasons with the Cubs over 2013-14, posting a combined .265/.346/.447 batting line with 25 home runs and 18 steals over 935 plate appearances. Coghlan has scuffled thus far in Oakland with an ugly .146/.215/.272 slash, but those results and eroding plate discipline — he owns an uncharacteristic 27.3% strikeout rate against a diminished 7.6% walk rate — didn’t deter his former club.

There was a time when it would have seemed that Alcantara was the perfect player to plug into just such an opening. A middle infielder by trade, he saw ample time on the outfield grass upon his promotion in 2014. But the 24-year-old has never quite blossomed at the big league level, and wasn’t showing any signs of resolving his strikeout issues at Triple-A.

Still, he’s an interesting wild card for the A’s. Though he’s yet to show consistent on-base skills, Alcantara is generally regarded as a quality fielder and has loud tools on offense, with a history of double-digit home runs and steals. Indeed, over 213 plate appearances at the highest level of the minors this year, he has already swiped twenty bags.

Here are reactions to and fallout from today’s trade between the Cubs and Astros, which sent Dexter Fowler to Chicago for Luis Valbuena and Dan Straily.

As a former player, Dodgers manager Don Mattingly can relate to what Cubs prospects Javier Baez and Arismendy Alcantara are going through, writes David Just of the Chicago Sun-Times. “It’s just a time factor with the young guys,” Mattingly said. “They can look good right away, and the next year they come out and it doesn’t look good. Or they can look kind of shaky and figure a lot of it out. So time is going to tell.” As a youngster, Mattingly got off to a slow start with the Yankees, hitting .278 with a .326 on-base percentage in his first 98 games during the 1982 and ’83 seasons. He then led the American League in hits, doubles, and batting average in 1984.

Here’s the latest from the NL Central: