The Rangers’ open tryouts today have unearthed a number of interesting names, as Jeff Wilson of the Fort Worth Star-Telegram writes (Twitter links). Among those trying out today are three hurlers who’ve pitched in the Rangers’ system — Kameron Loe (who was a starter and reliever for the Rangers from 2004-2008 and pitched last season with the White Sox’ Triple-A affiliate), Mark Hamburger (who made five relief appearances with the 2011 Rangers) and Blake Beavan (who was the Rangers’ first-round pick in 2007 and who pitched parts of four seasons in the big leagues with the Mariners). Also appearing today are Justin Masterson (who recently pitched a showcase after appearing the Pirates’ minor-league system last year), Kyle Drabek (the former Blue Jays top prospect, who pitched briefly for the Diamondbacks in 2016) and Jose Veras (the veteran bullpen righty, who pitched last year in independent ball). Here’s more from the West divisions.

How intent was Justin Turner on re-signing with the Dodgers?  According to ESPN’s Buster Olney (subscription required), Turner didn’t clean out his locker at the end of the season and continued to go through his winter workouts at Dodger Stadium.  There was very little buzz on the rumor mill linking Turner to any club besides Los Angeles, and sure enough, the two sides continued their relationship when Turner inked a four-year, $64MM deal.  Here’s more from around the National League West…

The Padres have claimed righty Tyrell Jenkins off waivers from the Reds, San Diego announced. Cincinnati evidently sought to slip the 24-year-old through waivers, but he’ll land on the 40-man roster of a new organization instead.

This isn’t the first time Jenkins has changed hands this winter, of course. He previously went from the Braves to the Rangers via trade before being designated by Texas and claimed by Cincinnati.

It’s obvious that plenty of teams still like Jenkins’s arm, despite his less-than-inspiring 2016 season. A sandwich-round selection in the 2010 draft, Jenkins has posted excellent run-prevention numbers in the upper minors, but lacks the peripherals to match them.

The Reds announced on Friday that they’ve claimed infielder/outfielder Richie Shaffer off waivers from the Phillies and also claimed right-hander Tyrell Jenkins off waivers from the Rangers. Both players were recently designated for assignment by their now-former organizations.

Shaffer, 25, spent parts of the 2015-16 seasons at the Major League level with the Rays but batted a disappointing .213/.310/.410 in 142 plate appearances. The former first-round pick has been considerably more productive at the Triple-A level, where he’s slashed .243/.338/.445 with 30 homers in 188 games. Shaffer, a right-handed hitter, has experience at all four corner positions but has spent the majority of the time at first base. In his big league career, he’s actually been better against right-handed pitching than left-handers, but he doesn’t come with much of a platoon split looking back throughout his minor league career. He’ll presumably compete for a bench job with Cincinnati in Spring Training.

Jenkins, meanwhile, has moved around the league quite a bit in the past couple of years. The former Cardinals top prospect (drafted No. 50 overall in 2010) went to the Braves in the Jason Heyward/Shelby Miller deal back in 2014, and Atlanta traded him to Texas earlier this month. The Rangers, though, designated Jenkins for assignment this week and weren’t able to pass him through waivers. Jenkins draws plenty of praise for his athleticism, but he’s posted rather unsightly numbers in the Majors (5.88 ERA, 4.5 K/9, 5.7 BB/9 in 52 innings) and in questionable rate stats in Triple-A (2.86 ERA in 129 innings but with 5.9 K/9 and 3.8 BB/9). Jenkins won’t turn 25 until July, however, so the Reds are adding a bit of upside at minimal cost for the time being. (It seems far from a given that Jenkins will survive the offseason on Cincinnati’s 40-man roster.)

The Rangers have announced that they’ve claimed lefty David Rollins off waivers from the Phillies. In a corresponding move, they’ve designated righty Tyrell Jenkins for assignment.

The Phillies designated Rollins for assignment last week. His claim by the Rangers marks the fourth such time he’s been claimed in a little over a month. The Cubs claimed him from the Mariners in November, only to lose him on a claim to the Rangers four days later. The Phillies claimed Rollins from the Rangers early this month, and now the Rangers are claiming him for a second time.

The Rangers only acquired Jenkins earlier this month, getting him along with lefty Brady Feigl from the Braves in exchange for hard-throwing righty Luke Jackson. Jenkins was once a well-regarded prospect in the Cardinals system before going to the Braves in the Jason Heyward deal. Since then, though, Jenkins has posted unimpressive peripheral numbers in both the minors and Majors, culminating in a 5.88 ERA, 4.5 K/9, 5.7 BB/9 and an awful 11 home runs in 52 innings in his big-league debut last season. Jenkins is still just 24 and has never been used much as a reliever, so another team could see upside in him, either as a starting option or out of the bullpen. 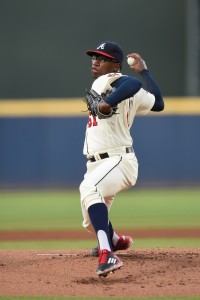 Nationals infielder Trea Turner had an impressive season debut today, but the plan is for him to return to Triple-A once Ryan Zimmerman is back from paternity leave, manager Dusty Baker told reporters including MLB.com’s Jamal Collier (Twitter link). That’s not to say that he won’t play a more significant role later in the year, of course. Danny Espinosa and Stephen Drew have been solid defensively but have combined for an anemic 65 wRC+ on the year.

While the Braves were never expected to be a contender in 2016, the club’s 5-17 start is nonetheless a disappointment to a front office that expected to see some improvement over last year’s 67 wins, writes Ken Rosenthal of FOX Sports. “We’re obviously disappointed in the way this season has gone,” GM John Coppolella tells Rosenthal. “We’re not going to make excuses. We know we need to play better.” Notably, Rosenthal writes that it’s “difficult to imagine” manager Fredi Gonzalez surviving the club’s upcoming eight-game road trip, though he notes that it’s unlikely that any other manager could extract positive results from the current roster, especially with Ender Inciarte on the shelf and Freddie Freeman struggling so greatly. Were Gonzalez to be dismissed, Rosenthal lists first base coach Terry Pendleton and bullpen coach Eddie Perez as candidates to replace him on an interim basis. The Braves extended Gonzalez and the rest of the coaching staff through the end of the 2016 season last July.