Twins prospect Ryan Costello passed away over the weekend at just 23 years of age, the team announced Monday morning. Costello had been in Auckland, New Zealand and was slated to play third base for the Auckland Tuatara in the Australian Baseball League beginning this week.

“The Minnesota Twins are deeply saddened to learn of the untimely passing of Ryan Costello yesterday in New Zealand,” the team said in a press release this morning. “On behalf of the entire organization, the Twins send their most sincere condolences to Ryan’s family, friends, coaches and teammates.”

Preliminary indications suggest that Costello died of natural causes, writes Daren Smith of MiLB.com, citing a statement from the Tuatara. Costello was a 31st-round pick of the Mariners in 2017 and came to the Twins in the 2018 trade that sent lefty Zach Duke to Seattle. MLBTR extends its sympathies to the family, friends and teammates of Costello as well as the entire Twins organization.

5:01pm: MLB.com’s Mark Feinsand tweets that the Twins sent $75K to the Mariners in the deal, which will leave Seattle on the hook for just over $600K of Duke’s salary.

4:36pm: The Mariners have deepened their relief corps as they continue to stock up for a potential postseason run, adding veteran lefty Zach Duke in a trade with the Twins. In exchange for Duke, an impending free agent who is owed about $683K of his $2.05MM salary through season’s end, Minnesota will receive right-hander Chase De Jong and minor league corner infielder Ryan Costello. Because De Jong was already on the Mariners’ 40-man roster, Seattle won’t need a corresponding move for Duke. 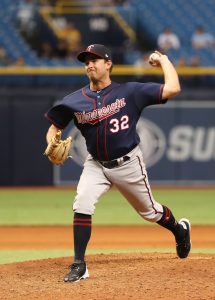 Duke, 35, had Tommy John surgery in 2016 but returned for the last couple months of the 2017 season and pitched well enough to land a big league deal from the Twins this offseason. Minnesota was rewarded with 37 1/3 innings of 3.62 ERA ball from Duke, who has averaged 9.4 K/9 and 3.6 BB/9 without allowing a home run this season. Duke’s superb 58.8 percent ground-ball rate ties a career-high (set in 2016 prior to his surgery).

As one would expect, Duke comes with a fairly notable platoon split. Minnesota has used him in 45 games this season but only allowed him to total 37 1/3 innings — a split that is indicative of his status as more of a lefty specialist than a full-inning setup piece. Indeed, left-handed opponents have mustered just a .237/.274/.288 slash against Duke, while righties have hit slashed a much more potent .303/.409/.351 against the veteran southpaw.

Duke will give the Mariners a lefty option to step into the role which Seattle had hoped fellow veteran Marc Rzepczynski could fill in 2017-18. Unfortunately for Seattle, Rzepczynski’s two-year, $11MM deal proved to be a substantial misstep. “Scrabble” struggled in both seasons with Seattle and was released earlier this season. Duke will complement James Pazos and Roenis Elias as southpaw options in manager Scott Servais’ bullpen, giving him a trio of lefties to deploy as matchups dictate.

As for the Twins, they’ll acquire a former second-round pick (Blue Jays, 2012) with minor league options remaining in De Jong. The 24-year-old made his big league debut with Seattle last season but was hit hard in 28 1/3 innings. De Jong yielded 20 runs on 31 hits (five homers) and 13 walks with just 13 strikeouts in 28 1/3 MLB frames last season.

That said, De Jong is still just 24 years of age and has had a solid, if unspectacular season pitching for Seattle’s Double-A affiliate this season. Through 120 2/3 innings, De Jong has notched a 3.80 ERA with 6.6 K/9, 2.5 BB/9, 0.9 HR/9 and a 39.2 percent ground-ball rate. Despite some big league experience, he technically retained his prospect status and ranked 28th in an admittedly dismal Mariners’ farm system, per Jim Callis and Jonathan Mayo of MLB.com.

Costello, 22, was the Mariners’ 31st-round pick in the 2017 draft out of Central Connecticut State University. He’s posted solid numbers in the Class-A Midwest League this season, though as a college bat playing against younger competition, that should be the expectation. In 406 trips to the plate, Costello has hit .266/.360/.486 with 16 homers, 24 doubles and a pair of triples while posting a 12.6 percent walk rate against a 20.2 percent strikeout rate. He won’t factor in anywhere near the top of the Twins’ prospect rankings, but he’ll add a left-handed bat with some pop to the lower levels of the Twins’ system.

De Jong is the more immediate return for the Twins, and while he profiles more as a swingman than a rotation option, that’s not a bad return for a couple of months of a lefty specialist who was set to hit free agency. Of course, it’s also a pretty easy commodity for the Mariners to surrender in order to improve their options in high-leverage spots down the stretch and, ideally, into the postseason. It’s hardly an exciting trade, but it’s one that makes a fair bit of sense for both parties involved.

Jon Heyman of Fancred reported that the Mariners had a deal to acquire Duke (via Twitter). Joel Sherman of the New York Post reported the return (also via Twitter).