The Tigers are next in our Offseason In Review series.

The Tigers' offseason was all about being aggressive early, as they locked up Inge, Peralta, Benoit, and Martinez before the end of November.  GM Dave Dombrowski was able to land his top targets, but often had to overpay in the process.

Dombrowski's commitment to Benoit shook the relief market.  The contrast was stark for a reliever whose previous contract was a minor league deal.  Explained the GM, "When you want to get the best players at certain positions, you have to be aggressive and prepared to do things."  The Tigers should be commended for signing the reliever they felt was the best available, going the extra mile to get it done.  Like most eight-figure relief contracts, this one is risky – Benoit is a 33-year-old who had rotator cuff surgery in January of '09.

The early push to sign Inge and Peralta is more difficult to understand.  Despite being known as an offensive-minded infielder, Peralta hasn't hit much since '08.  And while Inge might make up for Peralta's lack of range, he's a negative with the bat as well.  The free agent market typically doesn't reward defense-first players with the kind of contract Inge received.  The Tigers' goal here seemed to be to secure the left side of their infield and have cost certainty before moving on to bigger fish. 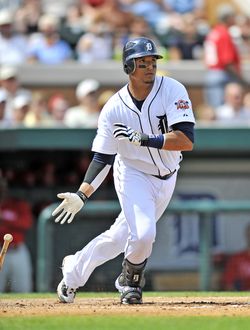 That big fish was Martinez (pictured).  The popularity of Martinez and Adam Dunn on the free agent market showed that teams are willing to make large commitments to players with little defensive value.  Martinez has more than Dunn, in that the former can don the tools of ignorance without embarrassing himself.  I would have liked the V-Mart signing more if it didn't require giving the Red Sox the best unprotected draft pick at #19.  Now, the Tigers won't have a pick in the 2011 draft until #76.  Still, the team got the capable middle of the order bat they sought from the outset of the offseason.

Dombrowski was able to further bolster the offense by signing Ordonez, who chose the popular Scott Boras "pillow contract" as he attempts to rebuild value after a fractured ankle ended his season in July.  Unlike Carlos Pena, Ordonez was at least coming off a strong season.  However, at age 37, Ordonez's durability will be a huge question mark – especially with Martinez claiming the DH spot most of the time.

Converted reliever Phil Coke filled one rotation spot, while Dombrowski took a $3MM flier on Penny for the other.  Sooner or later teams will stop guaranteeing Penny millions of dollars on the hope that he will have another 2007.  To be fair, Penny only needs to provide 100 solid innings to be worth the $3MM guarantee.  The bigger question is where the Tigers will turn when they inevitably need a sixth or seventh starter.  Andy Oliver is big league ready, though top prospect Jacob Turner is only 19 years old.  Lefties Casey Crosby, Duane Below, Charlie Furbush, and Adam Wilk could factor in depending on the magnitude of the Tigers' need.  MLBTR's Ben Nicholson-Smith addressed the Tigers' rotation depth last month in a piece at FanGraphs.

The Tigers had significant money come off the books after the '10 season, and despite their numerous free agent commitments the Opening Day payroll still appears to be down about $27MM.  I wasn't a fan of all of Dombrowski's choices, but I respect his aggressive pursuit of primary targets.  If the 2011 Tigers fail, it won't be because the market got away from them and they had to go to Plan B or C.