The Phillies are next in our Offseason In Review series.

The Phillies pulled off the surprise of the offseason, righting a past wrong and adding Cliff Lee to an already-strong rotation.  GM Ruben Amaro Jr. stretched his payroll to accommodate Lee, so the signing sums up most of the team's offseason.  Given all of their recent success, the Phillies extended Amaro in March, just after he'd extended manager Charlie Manuel.

The Phillies made an attempt to re-sign Werth, reportedly offering three years and $48MM plus a vesting option.  With Werth ultimately landing a seven-year, $126MM deal, the Phillies' offer appears half-hearted.  Still, plenty of people pegged Werth for something like four years and $65MM heading into the offseason, and with that in mind the player's biggest concession to the Phillies would have been accepting a fourth-year vesting option. 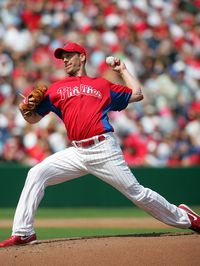 No one predicted the Phillies would sign Lee, and reports of a Mystery Team in the mix in December were initially scoffed at.  Technically Lee left a guaranteed $28MM on the table to sign with his preferred team, though this wasn't Andre Dawson giving the Cubs a blank check.  Lee's $24MM a year salary is higher than it would have been had he taken a seven-year offer from the Yankees or six years from the Rangers, and it's a record for pitchers.

The Phillies checked the "bill me later" box on the Lee contract, designing it to pay him only $11MM in 2011 before his salary jumps past $20MM thereafter.  They also potentially left the biggest bill for 2016, the lefty's age 37 season.  A $27.5MM option for 2016 vests if Lee is not on the disabled list at end of 2015 season with injury to left elbow or left shoulder, and has 200 innings pitched in 2015 or 400 innings pitched in 2014-15.  If the option does not vest, the Phillies will presumably take the buyout, which at $12.5MM is the biggest I've even seen.  Hopefully those numbers won't look as scary entering the 2016 season.

Prior to the Lee deal, the Phillies re-signed Contreras to a two-year deal.  Even at his age the contract doesn't look bad now, in light of the ten eight-figure contracts given to free agent relievers later in the offseason.

The Phillies appear light at second base, right field, and the bullpen this point, though the injuries to Chase Utley, Domonic Brown, and Brad Lidge didn't happen until Spring Training.  I don't see much Amaro should have done differently during the offseason.  Adding a Jerry Hairston Jr. or Willie Bloomquist just to be safe wouldn't have made much difference.  Perhaps Amaro could've dabbled a little on the low end of the relief market, nabbing a Jon Rauch, Dan Wheeler, or Chad Qualls in the $3MM range.  I liked that Amaro held onto Joe Blanton rather than doing some kind of salary dump deal.

Amaro put all his eggs in the Cliff Lee basket this offseason, and it's hard to find fault with that.  The Phillies' rotation appears historically good.  It's possible all the big salaries will limit flexibility this year and in the near future, though Amaro always seems to find a few million bucks in the couch cushions when needed.