The Indians announced that they have signed Mark Reynolds to a one-year contract. The deal is worth $6MM, according to Brittany Ghiroli of MLB.com (via Twitter). Reynolds could earn as much as $7.5MM if he reaches certain performance bonuses. With Reynolds manning first base, the Indians will turn to Lonnie Chisenhall as their starter at the hot corner. 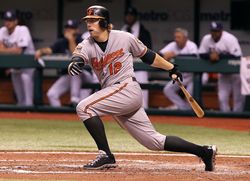 The Orioles paid Reynolds a $500K buyout instead of exercising his $11MM option following the regular season. He remained under team control as an arbitration eligible player with a projected salary of $8.9MM, but the Orioles elected to non-tender him.

Jon Heyman of CBSSports.com first reported that a deal was imminent (on Twitter). Mike Axisa and Ben Nicholson-Smith contributed to this post. Photo courtesy of Kim Klement/US Presswire.