2:38pm: There won't be a repeat of 2013's early-season closer carousel for the Tigers in 2014. Detroit officially announced today that it has signed one of baseball's elite closers — Joe Nathan — to a two-year contract with a club option for a third year. The contract is reportedly in the $20MM range. Nathan is represented by agent Dave Pepe of Pro Agents, Inc. 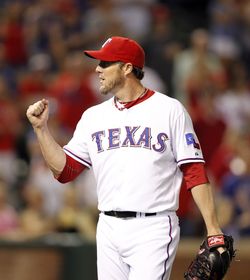 The 39-year-old Nathan is coming off one of the finest seasons of his storied career, having pitched to a 1.39 ERA with 10.2 K/9 and 3.1 BB/9 in 64 2/3 innings with the Rangers in 2013. Nathan added 43 more saves to his resume, tying him for 10th all-time with the legendary Rollie Fingers at 341. In his free agent profile of Nathan six weeks ago, MLBTR's Tim Dierkes predicted that the active Major League saves leader would and a two-year deal worth $26MM.

Nathan will fill a void that the Tigers were unable to fill early in the 2013 season when Bruce Rondon, Phil Coke and Jose Valverde were unable to solidify the ninth inning. Though this year's free agent market is rife with closer types — Grant Balfour, Fernando Rodney, Joaquin Benoit, Edward Mujica, Jose Veras, Kevin Gregg, Chris Perez all saved 20 or more games — Nathan appears to be the first domino to fall. Former Giants closer Brian Wilson is also reportedly nearing a deal to return to the Dodgers, suggesting that the relief market could pick up in the near future.

It's already been a highly active offseason for Tigers general manager Dave Dombrowski. In addition to the Nathan deal, he's pulled off a blockbuster trade by flipping Prince Fielder (and $30MM) to the Rangers for Ian Kinsler, and he's also traded Doug Fister to the Nationals for Steve Lombardozzi, Ian Krol and Robbie Ray.