As I mentioned in my opt-out feature article last week, five players have used an opt-out to secure a new contract or extension: Alex Rodriguez, J.D. Drew, A.J. Burnett, C.C. Sabathia, and Rafael Soriano. A-Rod and Sabathia stayed with the Yankees, with Sabathia getting a year added to his contract just before the point of opting out.  Drew, Burnett, and Soriano signed with new teams.

One negative often associated with opt-out clauses is that if a player has two or three good years, he'll just opt out and his former team will miss out.  But what if the five players above had not opted out?  Would their teams have come out ahead?

For this exercise, we'll use FanGraphs' dollar valuations, which were explained here by Dave Cameron.  My definition of an opt-out clause is a provision where the player can become a free agent midway through a multiyear deal, at a point where he has multiple guaranteed years remaining.

Take a look at the following table, which shows each player's age in the season immediately following his opt-out: 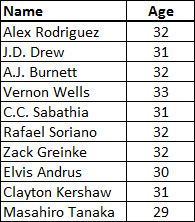 Of the ten opt-out clauses in baseball history, only Tanaka could opt out and sign a new contract that begins on the right side of 30.  Even Kershaw could be mortal by his age 31 season.  With an average age of 31 after the opt out, it's not surprising that with four of the five opt-outs that have been employed, the team was better off losing the player and the back end of his original contract.