JULY 16: The Red Sox announced that they have released Pierzyski.

JULY 9: The Red Sox are set to designate catcher A.J. Pierzynski for assignment, sources tell Ken Rosenthal of FOX Sports (via Twitter). The 37-year-old veteran signed a one-year, $8.25MM deal to join Boston over the past offseason. 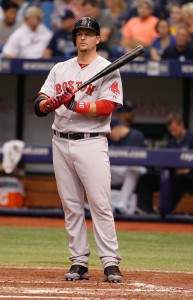 The veteran could still hold appeal to clubs looking for options behind the dish. As MLBTR’s Tim Dierkes recently explored, the trade market includes relatively few available, attractive veteran backstops. Unless the Sox can find a taker for some of his remaining salary, they will eat the approximately $3.6MM left on Pierzynski’s contract.

Parting with Pierzynski could well be the first step towards at least a partial break-up of a Red Sox team that has fallen well off its World Series from of a year ago. Sitting 10 and a half games out of the division lead, the Red Sox will give a chance to youngster Christian Vazquez, who will learn on the job with help from veteran backup David Ross.

In an appearance on WEEI radio (Twitter links via WEEI.com’s Alex Speier), manager John Farrell confirmed that the club is aiming for something of a youth movement. “We’re turning the page in terms of investing in young players,” he said. Indeed, Vazquez will be one of five rookies in the lineup card for the club tonight, as Tim Britton of the Providence Journal tweets.