Per an announcement from the FOX Sports Network, veteran catcher A.J. Pierzynski has agreed to serve as a full-time analyst for the upcoming season. He is expected to do color work and appear on the “MLB Whiparound” show.

Pierzynski, 40, spent each of the past two seasons with the Braves. While he was quite productive in 2015, he tailed off significantly last year. There were signs that he would likely call it quits, though that soon shifted. To this point, nothing had — or, still has, so far as we know — been formalized.

With today’s news, though, it seems safe to assume that Pierzynski will wrap up his career after parts of 19 MLB seasons. He has certainly enjoyed the kind of run that few backstops are able to pull off, having played in over 100 games in every single campaign between 2001 and 2015.

An exceptionally durable receiver, the left-handed-hitting Pierzynski also featured as a steadily useful hitter. All told, he has accumulated a solid .280/.319/.420 batting line with 188 home runs in 7,815 total MLB plate appearances.

Though he wasn’t always beloved by opponents, Pierzynski never had much trouble finding organizations interested in utilizing him. His longest and perhaps most memorable run came with the White Sox, where he was part of the team’s 2005 World Series winner, caught historic pitching performances from Mark Buehrle and Philip Humber, and picked up one of his two All-Star appearances.

Pierzynski also spent six years with the Twins — the organization that selected him in the third round of the 1994 draft. Some of those were among his most productive as a pro, and the organization was able to cash him in to the Giants for a trade package featuring Francisco Liriano and Joe Nathan. In addition to his one-year run in San Francisco, Pierzynski spent single or partial seasons with the Rangers, Red Sox, and Cardinals.

If this is indeed Pierzynski’s career terminus, as seems reasonable to assume, MLBTR extends him its congratulations and best wishes for the future.

Veteran catcher A.J. Pierzynski will pursue a free agent deal this winter, according to SB Nation’s Chris Cotillo (Twitter links). There had been rumblings that the 39-year-old would hang up his spikes at season’s end.

It would seem there’s still a possibility that Pierzynski calls it quits if he can’t find an offer to his liking, but he won’t do so before testing interest. He will enter a market that features quite a few second catcher candidates, though of course that also reflects the fact that many teams will be sending receivers into free agency. With catching in high demand league-wide, it wouldn’t be surprising to see a club take a chance on the elder statesman.

Pierzynski will not be entering another run at the open market with the best of platform seasons. He slashed a meager .219/.243/.304 with two long balls in his 259 trips to the plate last year. Though he played in half of Atlanta’s total contests, even though his season ended early due to injury, Pierzynski failed to tally 100 games for the first time since way back in 2000 — ending a rather remarkable run.

Teams weighing a run at the salty veteran will no doubt be intrigued by his 2015 season, in which he provided the Braves with 436 plate appearances of .300/.339/.430 hitting. That showing earned him a $3MM contract to return in 2016. Over Pierzynski’s 19 major league campaigns, he has also appeared with the White Sox, Twins, Giants, Cardinals, and Rangers, compiling a lifetime .280/.319/.420 batting line and launching 188 home runs.

SUNDAY: The Braves have placed Pierzynski on the 15-day disabled list with a strained right hamstring, per a team announcement. Based on Saturday’s retirement rumblings, it’s possible he has played his last game.

SATURDAY, 10:52pm: In yet another twist, Pierzynski has left the door for retirement open, telling reporters, “I don’t know what’s going to happen. I don’t know what tomorrow’s going to bring, but if that’s it, then it was fun” (Twitter link via O’Brien).

10:03pm: Braves catcher A.J. Pierzynski has decided to retire, according to David O’Brien of the Atlanta Journal-Constitution (Twitter link). Pierzynski was hugging teammates and handing out cigars after the Braves’ win over the Mets on Saturday, per O’Brien.

The polarizing Pierzynski, 39, played for seven teams in parts of 18 major league campaigns. His final season didn’t go well, as he batted just .219/.243/.304 in 259 plate appearances, but he was a quality contributor as recently as last year. In his first of two years in Atlanta, Pierzynski slashed .300/.339/.430 over 436 trips to the plate, leading the club to re-sign him last offseason to a one-year deal with a $3MM base salary.

Before joining the Braves, Pierzynski divided an unproductive 2014 between St. Louis and Boston. He previously played for the Rangers, White Sox, Giants and Twins, and will be best remembered for his time in Chicago. During his tenure with the White Sox from 2005-12, Pierzynski helped the club to a World Series title in his first year in Chicago, caught a no-hitter from Mark Buehrle and Philip Humber’s perfect game, played in no fewer than 128 games in each individual season, and earned his second and final career All-Star nod in 2006. That year, Pierzynski drew the ire of Cubs catcher Michael Barrett, who punched Pierzynski after a home plate collision and incited a brawl between the teams during a May matchup.

The year before he arrived in Chicago, Pierzynski spent 2004 in San Francisco, which acquired him in one of the most lopsided trades in recent memory. To land Pierzynski, the Giants sent southpaw Francisco Liriano, all-time great closer Joe Nathan and right-hander Boof Bonser to the Twins. While the Twins reaped the rewards of that return for several years, Pierzynski disappointed in San Francisco and then signed as a free agent with the White Sox.

Pierzynski, whom the Twins selected in the third round of the 1994 draft, hit .280/.318/.420 with 188 home runs in 7,813 career trips to the plate and was worth in the neighborhood of 23.0 WAR, according to both FanGraphs and Baseball-Reference – the latter of which lists his career earnings as upward of $61MM. MLBTR congratulates Pierzynski on a fine career.

The Mets are “pretty optimistic” of landing free agent infielder/outfielder Ben Zobrist, Adam Rubin of ESPNNewYork.com tweets. New York expects a decision today or tomorrow, Joel Sherman of the New York Post reports (Twitter links). While the team has yet to formally offer a fourth year, says Sherman, it would work out a fourth year if Zobrist indicates he’d like to join the club.

Here are some more updates on the market for infielders: 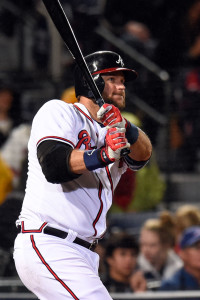 Twins owner Jim Pohlad has given GM Terry Ryan carte blanche this offseason, tweets Darren Wolfson of 1500 ESPN. That shouldn’t be read to mean that Minnesota will compete to sign Jason Heyward and David Price, but it could signal a more aggressive stance from the club. After years of rebuilding, the team finally has a potent young core headlined by Miguel Sano and Byron Buxton. They entered 2015 with a $108MM Opening Day payroll about half of which went to Joe Mauer, Ervin Santana, Ricky Nolasco, and Phil Hughes. They’ll all return with similar contracts. I would anticipate a modest increase in payroll with veteran bench depth and the bullpen as top priorities.

Kim Ng, the senior vice president of baseball operations at MLB’s central offices, will interview for the Phillies’ GM vacancy, writes Jon Heyman of CBS Sports in his latest Inside Baseball column. Ng, who has previously interviewed with the Dodgers, Angels, Mariners and Padres, still hopes to become the first female general manager of a team. (She has previously worked in several front offices as well.) Her pursuit of the Phillies’ job brings up the issue of diversity among front office execs and managers, Heyman notes, and commissioner Rob Manfred discussed with Heyman some steps the league could take to increase the hiring of minority candidates for such roles. Manfred places a good deal of blame on his own office, telling Heyman, “I am concerned that we at Central Baseball have to do a better job.” Manfred emphasized a need to better prepare minority candidates and to encourage the hiring of such candidates for entry-level positions, so as to deepen the pool of minority candidates from which MLB clubs can select.

Some highlights from Heyman’s weekly piece…

Twins general manager Terry Ryan met with the media today to discuss the team’s upcoming offseason. Some highlights from his wrap-up and other notes on the Twins…