The Rays have outrighted catcher Ali Solis to Triple-A, according to the Rays’ transactions page. Tampa’s 40 man roster now stands at 39 players.

The 26-year-old catcher has struggled with the bat. In 258 plate appearances for Triple-A Durham, Solis has hit .210/.238/.292. In 11 major league plate appearances spread over the last two seasons, Solis is 0-for-11 with six strikeouts and one walk. He appeared briefly with the Pirates last season.

A look back at the original reporting and analysis found on MLBTR this past week:

The Phillies announced that they have traded outfielder/first baseman John Mayberry Jr. to the Blue Jays in exchange for infielder Gustavo Pierre.

Mayberry, 30, has hit .213/.304/418 on the season, good for a 104 wRC+ (roughly league average). He’s best used as a lefty masher, as evidenced by his .255/.339/.582 line against southpaws this season. The Blue Jays are currently the 24th ranked team against lefties per wRC+, so the acquisition of Mayberry should help reinforce the July trade for Danny Valencia. Mayberry is owed about $250K  of his $1.59MM salary for the remainder of the season. He’s currently on the disabled list, but he can help Toronto beyond the 2014 season if they wish, as he is controlled through 2016 via arbitration.

Pierre, a 22-year-old utility infielder, has hit .260/.281/.389 on the season while spending most of the year at High-A Dunedin. He’s not ranked by Baseball America or any similar organization.

The Twins should look to the Cardinals, Braves, and A’s as role models, writes Phil Mackey of 1500ESPN.com. Like the Twins, those three clubs are middle class franchises, yet they also consistently succeed against the top payrolls in baseball. Mackey highlights a few traits to emulate. Minnesota should seek to supplement their upcoming prospects with affordable trade and free agent acquisitions. They can’t be afraid to trade a player at the height of his value (Joe Mauer and Justin Morneau come to mind). It also wouldn’t hurt to avoid bad contracts and exploit platoon hitters like Trevor Plouffe.

The Orioles made two trades last night, adding infielder Kelly Johnson and outfielder Alejandro De Aza, and any trade involving big-leaguers has an effect on not only a team’s 25-man roster, but its clubhouse. Via Roch Kubatko of MASNsports.com, manager Buck Showalter provides an interesting look into how trades affect players who aren’t being dealt. Showalter says, for example, that following the acquisition of De Aza, he spoke to Delmon Young and other players about what the trade meant for them. “It’s unknown that drives players crazy and you want them to understand things,” says Showalter. “I had a real good idea what they were going to say. They’re usually pretty short conversations, but you have them nonetheless.” Here’s more from around the big leagues.

On this date in 1974, in a Class A minor league contest, Portland Mavericks manager Frank Peters rotated his starting nine so that each player took a different position on the field for every inning. Somehow, it worked, as Portland notched an 8-7 victory over the Tri-Cities Ports.  Here’s this week’s look around the baseball blogosphere.

The Athletics have outrighted pitcher Deck McGuire to make room on their 40-man roster for Adam Dunn, MLB.com’s Jane Lee tweets. The A’s acquired McGuire from the Blue Jays in July for cash considerations.

McGuire, the Jays’ first-round pick out of Georgia Tech in 2010, has struggled in the high minors, taking several years to escape Double-A and posting poor numbers this year at Triple-A. He had an 8.05 ERA in seven starts at Sacramento since joining the A’s organization, striking out 16 batters and walking 16 in 34 2/3 innings.

1:49pm: Broxton was a waiver claim, C. Trent Rosecrans of the Cincinnati Enquirer writes (Twitter links). Reds GM Walt Jocketty says that the two teams have agreed on one of the players to be named later and have a list of players for the other.

12:49pm: The Brewers have bolstered their bullpen by acquiring right-hander Jonathan Broxton from the division-rival Reds in exchange for a pair of players to be named later, the teams have announced. 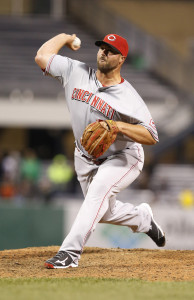 Broxton, 30, is in the second year of a three-year, $21MM contract with the Reds. He’s owed about $1.19MM of his $7MM salary this season before earning $9MM in 2015. His contract also contained a $9MM club option for 2016, which comes with a $1MM buyout. However, Broxton’s contract has a clause that causes that club option to become a mutual option with a $2MM buyout if he is traded, meaning he is now guaranteed $12.19MM through the end of the 2015 campaign and can reach free agency sooner even with a strong performance next year.

The former Dodgers closer is enjoying a strong year with the Reds. Broxton opened the season as Cincinnati’s closer with Aroldis Chapman on the disabled list, and he’s pitched well in a setup role since that time. In 48 1/3 innings this season, Broxton has pitched to a 1.86 ERA with 6.9 K/9, 3.2 BB/9 and a 45 percent ground-ball rate. Broxton has been fortunate on balls in play (.221 BABIP) and home runs (5.0% homer-to-flyball ratio), causing sabermetric ERA estimators such as FIP (3.52), xFIP (4.26) and SIERA (3.79) to rate his work less favorably than his actual run prevention rate would indicate.

Milwaukee’s bullpen could certainly use an upgrade, as they’ve recently lost both Tyler Thornburg and Jim Henderson to season-ending injuries. Broxton will provide manager Ron Roenicke with an experienced relief arm, as he figures to aid Will Smith and Brandon Kintzler in bridging the gap from a solid rotation to closer Francisco Rodriguez.

It’s unclear if Broxton had cleared waivers or whether the Brewers claimed him, although given his relatively large salary and the trade provision that increases his option buyout, he seems like a candidate to have cleared waivers. The budget-conscious Reds will likely save some, if not all of Broxton’s remaining salary, which will provide general manager Walt Jocketty with additional flexibility in the coming offseason. The Reds are expected to shop at least one of their starters this offseason, according to multiple reports, as Mat Latos, Johnny Cueto, Mike Leake and Alfredo Simon are all set to hit free agency following the 2015 season.