9:04am: The Diamondbacks have announced the hiring of Athletics bench coach Chip Hale as their new manager.  Contract terms weren’t announced, though CBS Sports’ Jon Heyman reported (via Twitter) that Hale signed a two-year deal to manage the club.  The D’Backs were rumored to be deciding on their new skipper today, and USA Today’s Bob Nightengale was the first to report that Hale has been hired. 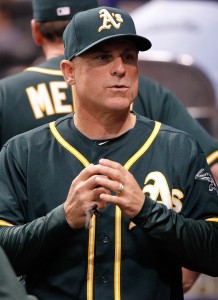 It is something of a homecoming for the 49-year-old Hale, who played college ball at the University of Arizona and began his coaching career in the D’Backs organization, working both as a minor league manager and as a Major League third base coach.  He has also worked as the Mets’ third base coach and has spent the last three years in Oakland under Bob Melvin.

Hale has been a contender for several open managerial positions over the last few offseasons, and was reportedly a finalist for the Mets (before they hired Terry Collins) and Mariners (before they hired Lloyd McClendon).  Most recently, the Twins sought to interview him during their manager search, though Hale reportedly canceled that interview in order “to see through this chance” at the D’Backs job, according to Nick Piecoro of the Arizona Republic (Twitter link).

Hale is the first hire for D’Backs GM Dave Stewart and chief baseball officer Tony La Russa as they look to turn around the last-place Snakes and move on from the Kirk Gibson/Kevin Towers era.  The club interviewed at least nine men for the manager’s job and had narrowed the field to Hale, former Rockies manager Jim Tracy, Indians first base coach Sandy Alomar Jr. and two internal choices in assistant hitting coach Turner Ward and triple-A manager Phil Nevin.