In a widely anticipated swap, the Athletics have officially agreed to ship outfielder/first baseman/DH Brandon Moss to the Indians in exchange for minor league second baseman Joe Wendle. 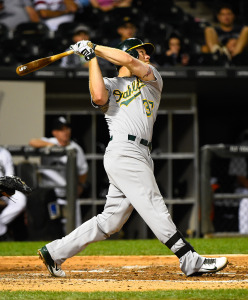 Moss, 31, is projected by MLBTR/Matt Swartz to earn $7.1MM this year, his second-to-last of arbitration eligibility. He is an accomplished power bat, with a 135 OPS+ and 76 home runs over the last three years.

But those figures have trended downward in each successive campaign. Then there is the fact that Moss’s value is limited by his poor defense in the outfield. Most worryingly of all, he has dealt with a significant hip issue that required offseason surgery.

The Indians will gladly roll the dice on a recovery, especially since the club will have a chance to decide whether to tender Moss after the season. Moss’s manageable salary offered the chance for Cleveland to add the big bat that many felt they needed, while his health questions lowered the ask. As Jordan Bastian of MLB.com rightly notes on Twitter, Cleveland may well need to do something to clear its logjam of first base/corner outfield type players.

For the A’s, this deal represents the latest sign that GM Billy Beane is firmly committed to cashing in assets that no longer have much potential to accumulate value and/or improve production. Moss joins Josh Donaldson and Yoenis Cespedes as former core players who have been moved by Oakland in recent months.

Wendle, a 24-year-old prospect, did not rate among the Indians’ top ten prospects in the recent estimation of Baseball America but did land at ninth on MLB.com’s most recent list. Wendle’s calling card is his hit tool, with which he combines decent power and solid defense. A broken hamate bone cut the 24-year-old’s season short, but he had put up a .253/.311/.414 line over 370 Double-A plate appearances and owned even an even more robust slash the prior year at High-A.

ESPN.com’s Buster Olney reported on Twitter that the teams’ prior talks were nearing completion. Jeff Passan of Yahoo Sports reported (Twitter links) that the deal was done, with Wendle making up the return. John Hickey of the Bay Area News Group first reported the connection between the clubs on Twitter, while Susan Slusser of the San Francisco Chronicle first reported that Oakland was interested in Wendle.