The Braves have struck a move to bolster their bullpen, adding right-hander Jason Grilli on a two-year deal with a third-year club option, the team announced Tuesday night. Grilli, a client of player-turned-agent Gary Sheffield, will reportedly earn $8MM over the life of the contract. 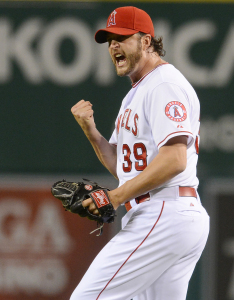 The 38-year-old Grilli got off to a rough start in 2014 — the second season of a two-year, $6.75MM pact with the Pirates. A 2013 All-Star, Grilli slumped to a 4.87 ERA through his first 20 1/3 innings this season and also missed roughly a month with an oblique strain. He ceded the closer’s role to Mark Melancon and was ultimately flipped to the Angels in a one-for-one trade that sent Ernesto Frieri to Pittsburgh. The swap of struggling closers didn’t pan out for Frieri, but Grilli managed to right the ship and was very good down the stretch with Anaheim.

In 33 2/3 innings with the Halos, Grilli notched a 3.48 ERA with 9.6 K/9 and 2.7 BB/9. The control problems he experienced in the season’s early stages seemed to be corrected with the Angels, and he showed no drop in velocity following the oblique injury, as he averaged 93.1 mph on his heater with both teams.

Grilli will likely assume a large chunk of the innings that would have gone to Jordan Walden, who was acquired by the Cardinals alongside Jason Heyward in the trade that sent Shelby Miller and Tyrell Jenkins to Atlanta. Craig Kimbrel, of course, will again be tasked with defending ninth-inning leads, so Grilli will join Shae Simmons, David Carpenter and reclamation project Jim Johnson in bridging the gap from the rotation to Kimbrel. His two-year deal will lock in his age-38 and age-39 seasons, also giving the Braves an option for his age-40 campaign.

Grilli’s interesting Major League career began with the Marlins in 2003 but didn’t really take off until 2011 with the Pirates. Grilli missed the 2010 season after undergoing surgery to repair a quadriceps injury, and he carried a lifetime 4.74 ERA to Pittsburgh before breaking out with a 2.48 ERA and a hefty 10.2 K/9 rate. Grilli improved further in 2012, increasing his workload from 32 2/3 innings to 58 2/3 as his strikeout rate soared to 13.8 per nine innings. He eventually staked a claim to the club’s ninth-inning role and made his first All-Star team as Pittsburgh’s closer in 2013 at the age of 36. Over the past four seasons, Grilli has totaled a 3.09 ERA with 11.9 K/9, 3.3 BB/9 and a 34.2 percent ground-ball rate in 195 1/3 innings. His outstanding 2.47 SIERA ranks 16th among 216 qualified relievers in that stretch.