The Padres and Mariners have announced a trade that will send outfielder Seth Smith from San Diego to Seattle in exchange for right-hander Brandon Maurer. 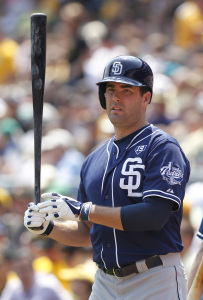 The 32-year-old Smith (pictured) unquestionably had an excellent 2014 campaign, and his career year earned him a two-year $13MM extension in early July. He’s slated to earn $6MM in 2015, $6.75MM in 2016 and has a $7MM club option ($250K buyout) for the 2017 season. The Padres, at the time of the signing, assured Smith that he wouldn’t be traded after signing, but that assurance was made by different leadership; GM A.J. Preller was not in place yet at that time.

Preller has taken a dogged approach to acquiring talent via trades this offseason, successfully obtaining an entirely new outfield of Justin Upton, Wil Myers and Matt Kemp. Those three additions have left Smith without regular at-bats, and his inability to handle center field makes him a poor choice as a fourth outfielder. Thus, despite hitting a strong .266/.367/.440 with 12 homers, he found himself a frequently mentioned trade candidate. Smith’s strong production was the best of his career, especially considering that it came at Petco Park, but the new Padres front office may have been wary of his ability to repeat a career year.

In acquiring Smith, the Mariners have netted a platoon partner for fellow trade acquisition Justin Ruggiano. Smith’s platoon problems are well known; he’s a lifetime .205/.291/.314 hitter against fellow lefties, but he’s crushed right-handers to the tune of a .277/.358/.481 batting line. That will pair well with Ruggiano’s .288/.357/.569 triple slash against southpaws over the past three seasons.

Upon first glance Maurer’s stats aren’t particularly appealing, but the 24-year-old became a different pitcher upon moving to the bullpen midway through the season. Maurer’s heater averaged better than 95 mph as a reliever, and he posted a 2.17 ERA with a 38-to-5 K/BB ratio in 37 1/3 innings out of the Seattle ’pen in 2014.

The Padres’ pursuit of Maurer has been ongoing for about a year, tweets Dennis Lin of the San Diego Union-Tribune. Some within the organization feel he could return to a starting role, though the Padres likely will rely on Andrew Cashner, Tyson Ross and Ian Kennedy atop their rotation, with a combination of Robbie Erlin, Odrisamer Despaigne, Brandon Morrow and Josh Johnson (once his deal is finalized) fighting for the final two spots. San Diego will control Maurer through the 2019 season, and he won’t be eligible for arbitration for another two years.

Maurer is the second arm acquired by the Padres to deepen the bullpen this week, as the Friars struck a deal to acquire Shawn Kelley from the Yankees yesterday. Maurer and Kelley will give manager Bud Black a pair of strikeout arms to add to a bullpen that already featured Joaquin Benoit, Kevin Quackenbush, Nick Vincent, Dale Thayer and Alex Torres. That creates a deep and formidable bullpen, though we of course shouldn’t rule out that possibility that Preller will deal some of those arms in further trades. Benoit, in particular, seems like a possible trade candidate to me, given his $8MM salary and the presence of other closing options in the Padres’ bullpen.

Shannon Drayer of 710 ESPN in Seattle was the first to report that a trade of Smith to the Mariners was close (Twitter link). USA Today’s Bob Nightengale first mentioned Maurer’s possible involvement in the deal (on Twitter). ESPN’s Jerry Crasnick reported that the swap was complete (on Twitter).