The idea of the Cubs trading catcher Welington Castillo is not a new one: it began to make sense when the team endeavored to sign Russell Martin, became highly plausible when Chicago acquired Miguel Montero, and became an apparent fait accompli when the team added veteran backup David Ross. But over two months have passed since the new backstop tandem was installed, and Castillo remains on the Cubs roster. 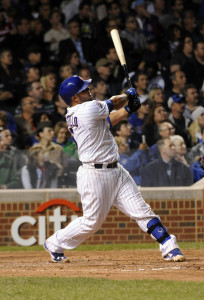 True, Castillo says that he hopes to remain with the only professional organization he’s known. And manager Joe Maddon says he could be on the roster, while president of baseball operations Theo Epstein recently insisted that three catchers on the 25-man is a realistic possibility. But the smart money remains on a deal.

After all, Castillo has yet to turn 28 and comes with two more seasons of control through arbitration. (He’ll cost $2.1MM for 2015.) Though he swung the bat at a slightly-below-average rate last year, Castillo is a league-average hitter over his career and slashed a combined .271/.345/.404 over 2012-13.

Castillo does come with some defensive questions. In particular, framing measures are not kind. Then again, he has been slightly above-average at eliminating would-be base-stealers and at handling balls in the dirt, resulting in fairly strong overall ratings in the non-framing departments.

A league-average hitting catcher who can at least hold his own defensively — and could theoretically improve in the receiving department — certainly has value, especially at arbitration rates. (Remember, players like Ross and Nick Hundley commanded two-year deals in free agency.) The primary question, really, is one of market demand. With Spring Training in full swing, most teams have obviously largely settled their budgets and their roster situations.

While an injury or significant performance could be necessary to drive interest, there are no shortage of clubs that appear even at present to be viable suitors, at least in theory. Some clubs might view Castillo as a legitimate starting option in the near future. For instance:

And several teams might conceivably consider Castillo as a bench upgrade or frequent platoon mate:

Of course, interest is heavily dependent upon how these teams view both Castillo and their internal options. But the list does demonstrate that it is still exceedingly difficult to find high-quality options to don the mask, making Castillo a valuable commodity (albeit one with potential trade market competition in Blue Jays catcher Dioner Navarro). How much value Castillo might return to Chicago will be a function of how the spring progresses, but it seems reasonably likely that more than one team could ultimately decide that pursuit is worthwhile.