1:07pm: The Blue Jays have agreed to acquire outfielder Ben Revere from the Phillies, MLB.com’s Todd Zolecki reports on Twitter. He joins a bevy of other additions heading to Toronto in a busy deadline for GM Alex Anthopoulos. 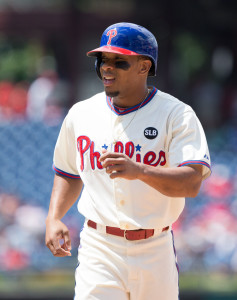 Revere owns a .298/.334/.374 slash on the year and while contributing 24 steals. That’s a fairly typical line for the speedy, left-handed-hitting outfielder. As Steve Adams of MLBTR noted earlier today, that brings something of a different element to Toronto’s high-powered offense.

In spite of his running ability, Revere is not generally considered an excellent defensive outfielder. But he has drawn much more positive ratings from both UZR and Defensive Runs Saved in 2015.

For Toronto, Revere could make sense as a platoon partner for Kevin Pillar in center as well as the team’s combination of Danny Valencia and Chris Colabello in left. All of those players hit from the right side of the plate.

The Phillies will pay the remainder of the $1.2MM owed Revere this season, Shi Davidi of Sportsnet.ca tweets. The Jays can control him for two more seasons through arbitration.