The Pirates announced on Thursday that they have acquired Tigers closer Joakim Soria in exchange for shortstop JaCoby Jones. 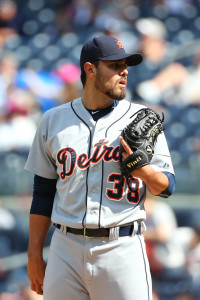 The Pirates have been known to be interested in bullpen help since last week and swung a minor deal to add Joe Blanton to the mix last night, but Soria would represent a much higher-profile addition to the Pittsburgh ’pen. A free agent at season’s end, the 31-year-old Soria is earning $7MM this season. He began the year as the Tigers’ primary setup option, but Joe Nathan blew out his arm in the early stages of the season, and Soria has seamlessly returned to a ninth-inning role with which he is quite familiar.

Soria has worked to a strong 2.85 ERA in 41 innings this season, although he’s also been uncharacteristically homer-prone, yielding what is already a career-high eight long balls on the season (1.76 HR/9). Home run rate can have quite a bit of randomness to it, so perhaps the Pirates are unconcerned (they’ve done well with other previously homer-prone arms such as A.J. Burnett and Mark Melancon). Both Soria’s walk rate (2.4 BB/9) and strikeout rate (7.9 K/9) are also down from an excellent 2014 season, but his bottom-line results remain strong.

It seems unlikely that Soria would supplant Melancon as the team’s closer, so the more likely scenario is that Soria will share setup duties with left-hander Tony Watson, who is enjoying a strong season in his own right. The Pirates have received strong production from their relief corps as a whole, although it’s been somewhat of a top-heavy unit, and a rental of Soria would deepen the group and help take some pressure off the rotation in the season’s final months.

Jones, a third-round pick from the 2013 draft, ranked as Pittsburgh’s No. 12 prospect on MLB.com’s midseason Top 30. Baseball America placed Jones 10th on their midseason Top 10 list for the Pirates.

Both Baseball America and MLB.com praise Jones’ combination of power and speed but note that he’s raw and a bit inexperienced at shortstop after playing mostly second base and center field at LSU. BA notes that he has a propensity to swing and miss, while MLB.com praises his aggressive style on the basepaths and pure athleticism.

Rob Biertempfel of the Pittsburgh Tribune-Review first connected the two sides (via Twitter), and MLive.com’s James Schmehl said a deal was getting close (also via Twitter). Jon Heyman of CBS Sports reported that the deal was done (Twitter link), and Biertempfel tweeted that Jones was headed to Detroit.