Left-hander J.P. Howell will exercise his $6.25MM player option with the Dodgers, reports ESPN’s Buster Olney (via Twitter). The 32-year-old Legacy Agency client will forgo free agency this offseason in order to return to the L.A. bullpen for a fourth consecutive season. 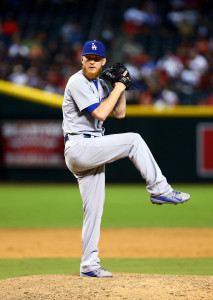 Howell is coming off an excellent season in the Dodgers’ bullpen, having logged a 1.43 ERA with 8.0 K/9, 2.9 BB/9 and a 60.3 percent ground-ball rate in 44 innings of work. His strong production continued what has been a dominant run since joining the Dodgers prior to the 2013 season, as Howell has compiled a brilliant 1.97 ERA in his 155 innings with Los Angeles.

That strong track track record makes it at least worth wondering if Howell could’ve landed a multi-year deal in a market that is thin on left-handed relievers with lengthy track records of success — Antonio Bastardo and Tony Sipp were likely his top competition — but it’s also probably fair to assume that he wouldn’t have received as large of an annual salary. And, there’s something to be said for returning to a familiar situation that has led to personal success and three consecutive division titles for the team.

Howell did have his struggles in 2015, specifically when it came to facing right-handed hitters. While he hadn’t dealt with platoon issues in his two prior years with the Dodgers, right-handed hitters knocked Howell around to the tune of a .318/.368/.455 batting line. Perhaps that split played a role in his decision to accept the option, although there’s certainly a case to be made that it was more a function of poor luck than anything skill-related. Right-handed hitters posted a sky-high .368 BABIP against Howell in 2015 that was worlds higher than his career mark of .293.

Howell’s return to Los Angeles means that he’ll again help serve as a bridge to one of the game’s best closers in the form of Kenley Jansen. Exactly which other names will constitute the back end of the Dodger bullpen is unclear, as the team has myriad options in the late innings. Luis Avilan and Ian Thomas serve as left-handed options to potentially complement Howell, while right-handers such as Chris Hatcher, Pedro Baez, Juan Nicasio and Yimi Garcia, among others, could constitute the right-handed setup crew. Of course, given the active nature of president of baseball operations Andrew Friedman and GM Farhan Zaidi, it certainly won’t be surprising to see the Dodgers shuffle their relief corps, to some extent, by dealing some of those arms and possibly bringing in external help in order to solidify a bullpen that is deep in options but lacking in proven arms.