Nolan Arenado broke out offensively in 2015 with 42 home runs, 130 runs batted in and a .287 batting average to go along with his third Gold Glove Award. Arenado was not a prolific power hitter before this year, so he only has 70 career home runs, including this year’s 42. This jump in power in his third year in the league is unique and makes it harder to find appropriate comparables for him when building an arbitration case. Our model has him at $6.6MM, but I could easily see this being either a big miss or a big win for the model. 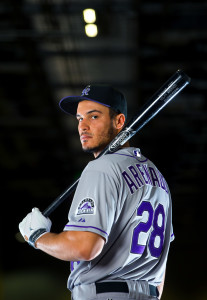 It has been eight years since the last time a hitter entered his first year of arbitration after clubbing at least 40 home runs in his platform year. That was when Ryan Howard beat the Phillies in an arbitration hearing to earn $10MM. However, Howard also had been a power hitter for over two seasons beforehand and had 129 career home runs, nearly twice as many as Arenado brings to the table. It seems very unlikely that Arenado could get $10MM.

Another thing that makes Arenado unique is his defense. No player in my dataset, which goes back nine years, has had three Gold Gloves before reaching arbitration eligibility. Only Matt Wieters had two, and he was a catcher. Wieters did earn $5.5MM, and while he’s a totally different position than Arenado at third base, the concept that he had such a high salary with one fewer gold glove and worse power numbers (23 HR, 83 RBI platform year; 65 and 249 career), could help Arenado argue that he deserves more. However, it is rare that a catcher would be a comparable player for a third baseman.

Another factor that could play into Arenado’s case is where Manny Machado lands. Machado is similar to Arenado in that he had an explosion of power in his platform year, hits for average, and plays third base very well. Both of these players are likely to earn similar amounts, although Arenado led the league in home runs and runs batted in, plus he has three Gold Gloves, which should give him a leg up on Machado. Both players will pay careful attention to where the other guy considers signing. Ultimately, I suspect both will fall short of their projected salaries (Machado’s projected $5.9MM is $700K less than Arenado’s $6.6MM projection). However, if one player does indeed reach his projection (which is certainly possible), the other is likely to have a better chance to do so as well.