The Mariners and Dodgers announced a relatively minor trade on Thursday that will send right-hander Joe Wieland to Seattle in exchange for minor league infielder Erick Mejia. In order to clear room for Wieland on their 40-man roster, the Mariners have designated fellow righty A.J. Schugel for assignment. From L.A.’s perspective, the departure of Wieland in exchange for a non-40-man player clears way for right-hander Yaisel Sierra, who reportedly agreed to a six-year deal with the Dodgers earlier today. 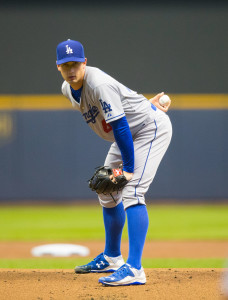 Wieland, who turns 26 next week, will provide the Mariners with some inexpensive rotation depth. The right-hander has already avoided arbitration by agreeing to a $590K salary with the Dodgers, who opted to give him that marginal raise despite the fact that injuries have limited Wieland to just 47 2/3 innings over his three-plus years of Major League service time. Most notably Wieland underwent Tommy John surgery in 2012 and missed the entire 2013 season.

To this point in his brief and injury-marred Major League career, Wieland has logged just a 5.85 ERA with 6.8 K/9, 3.6 BB/9 and a 39.4 percent ground-ball rate. He’s fared somewhat better at the Triple-A level, compiling a career 4.34 ERA while pitching exclusively in the hitter-friendly Pacific Coast League. Throughout his minor league tenure, Wieland has displayed the ability to miss bats at a reasonable level (8.2 K/9) as well as a knack for keeping the ball in the strike zone (1.9 BB/9). While there doesn’t appear to be an immediate place for him in the Mariner rotation — Felix Hernandez, Hisashi Iwakuma, Wade Miley, Taijuan Walker, James Paxton and Nate Karns are all ahead of him on the depth chart — Wieland can function as Triple-A depth or perhaps compete for a slot in the Seattle bullpen.

Mejia, 21, saw action at four levels last year in his age-20 season, batting a combined .282/.346/.339 with 20 stolen bases. He’s shown virtually no power to this point in his pro career, homering just once in 528 plate appearances, though he’s also displayed a solid knowledge of the strike zone, walking at a 10.8 percent clip against a strikeout rate of just 14.8 percent. Mejia didn’t rank among the Mariners’ top 30 prospects according to either MLB.com, but Baseball America did rank him 21st among Seattle farmhands last offseason. In that same offseason, Fangraphs mentioned Mejia as a “player of note” even though he didn’t rank among Seattle’s best prospects, with former FG scribe Kiley McDaniel writing that Mejia was an average runner with “enough glove to stick at short and enough bat that it matters.”

Schugel, 26, posted a 4.84 ERA with 6.2 K/9 against 2.5 BB/9 in 115 1/3 innings of work for the D-backs’ Triple-A affiliate in Reno this past season. While it’s a notoriously hitter-friendly environment, those results were nonetheless discouraging after a solid 2014 season at the Double-A level. He’d come to the Mariners by way of waiver claim after having been designated for assignment by the D-backs in order to clear a roster spot for Zack Greinke.

Jeff Passan of Yahoo Sports first reported that Wieland had been traded to Seattle (Twitter link).