The Athletics have acquired outfielder Khris Davis from the Brewers in a deal that will send catching prospect Jacob Nottingham and righty Bubba Derby to Milwaukee, per announcements from both teams. Oakland has designated pitcher Sean Nolin to clear roster space.

It’s certainly an interesting swap for both organizations. Oakland will presumably utilize the slugging Davis in left field, where he could share time with veteran Coco Crisp and another younger, right-handed slugger in Mark Canha. The move bolsters the club’s depth across the outfield grass while delivering some upside, too.

After all, Davis only just turned 28, will play at the league minimum this year, and can be controlled for three more seasons thereafter via arbitration. And he’s shown quite a bit with the bat, following a solid 2014 with an even better campaign last year. Over 440 plate appearances, he not only swatted 27 home runs, but posted a strong .247/.323/.505 overall batting line. 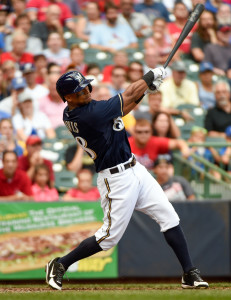 Davis is not very highly regarded with the glove, though defensive metrics have been mixed. He actually rated as a plus performer in left in 2014, but dipped into the negative territory last year.

The removal of Nolin from the 40-man roster is interesting to note, too. While he may yet remain with the A’s, if he can pass through outright waivers, the 26-year-old lefty was a not-insignificant part of last winter’s stunning Josh Donaldson trade. He wasn’t great in limited MLB action in 2015, allowing 17 earned runs and logging just 15 strikeouts in 29 frames, but had earned a promotion after battling through injury issues to post a 2.66 ERA with 7.2 K/9 against 3.6 BB/9 over 47 1/3 innings at Triple-A.

Looking at the Milwaukee side of the deal, the 20-year-old Nottingham looks like the jewel. He went to Oakland from the Astros — then the home of current Brewers GM David Stearns — as the key piece of last summer’s Scott Kazmir deal. He’s still a ways off, having only reached the High-A level, but does represent a theoretical long-term replacement for star catcher Jonathan Lucroy — who has, of course, been mentioned as a trade candidate quite often this winter.

Nottingham impressed last year, putting up a cumulative .316/.372/.505 batting line with 17 home runs over 511 plate appearances. Nevertheless, he did not crack Baseball America’s recent organizational top-ten list for A’s prospects, though others have been higher on him. John Sickels of SB Nation, for instance, rated him fifth among A’s prospects while noting that his bat is ahead of his glove. And Baseball Prospectus went so far as to place Nottingham as the 66th-best prospect league-wide.

Derby, a sixth-round pick in last year’s draft, had a strong debut in 2015. He only worked 37 1/3 total innings between Rookie ball and Low-A, but racked up 47 strikeouts while holding opposing clubs to just five earned runs. Soon to turn 22, Derby is a product of San Diego State University.

Parting with Davis appears to set up the Brewers to utilize youngster Domingo Santana in left field, giving him a clear shot at regular playing time. Milwaukee has several young players and rebound candidates who’ll be stepping into more regular roles, with an increasingly interesting slate of young talent approaching MLB readiness in the farm.

Susan Slusser of the San Francisco Chronicle first reported that a deal was nearing (Twitter links) and then tweeted that Davis would be heading to Oakland in the swap.