The Rays and right-hander Kevin Jepsen, who was released by the Twins recently following a DFA, have agreed to a Major League deal, reports SB Nation’s Chris Cotillo (links to Twitter). Marc Topkin of the Tampa Bay Times reported shortly before that news that the two sides were nearing a deal (via Twitter) and had first mentioned the Rays’ interest in a reunion with Jepsen last week, while Cotillo tweeted yesterday that the Rays were one of many teams to whom Jepsen and his agents at the Beverly Hills Sports Council had spoken. 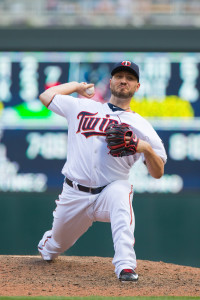 With this agreement, Jepsen now returns to the very club that traded him to Minnesota roughly one year ago (in exchange for minor league right-handers Chih-Wei Hu and Alexis Tapia). The soon-to-be 32-year-old was brilliant for Minnesota down the stretch last season and stepped into the Twins’ closer role following an injury to Glen Perkins, logging a pristine 1.61 ERA with 8.0 K/9, 2.3 BB/9, a 40.8 percent ground-ball rate and 10 saves. That stellar performance led to a $5.3MM salary in arbitration this offseason, but Jepsen looked like a completely different pitcher with the 2016 Twins than he did with the 2015 version of the team.

In 30 2/3 innings with Minnesota this season, Jepsen posted a dismal 6.16 ERA and saw a significant decline in nearly every rate stat. He averaged just 6.5 K/9 against 3.5 BB/9 with a 30.2 percent ground-ball rate. Per Fangraphs, Jepsen yielded 29.6 percent hard contact in 2015 but saw that number soar to 38.4 percent in 2016, thanks largely to an 8.5 percent increase in his line-drive rate (19.8 percent to 28.3 percent). He’s also seen drops in the chase rate and swinging-strike rate of his opponents, and opposing batters have greatly upped their contact rate against him.

Suffice it to say, the 2016 season hasn’t gone as planned for Jepsen (or for the last-place Twins). However, the Rays have had success with reclamation projects of this nature in the past, and Jepsen comes at a very affordable rate. The Twins are on the hook for the remainder of that $5.3MM salary (minus the pro-rated portion of the league minimum, which means he’ll cost the Rays about $222K through season’s end.

Jepsen will join a Rays bullpen that currently features Alex Colome as the closer. Brad Boxberger had been tabbed for that role after leading the AL in saves in 2015, but he underwent hernia surgery in Spring Training and suffered an oblique strain in his first appearance back on the mound in late May when he returned from that first injury. Tampa Bay’s relief corps also features right-handers Erasmo Ramirez, Matt Andriese and Tyler Sturdevant at the moment. That group is probably safe, but Jepsen could take over the spot of struggling relievers Enny Romero or Ryan Garton. A 40-man roster move will also need to be made to accommodate Jespen’s return.