Continuing with this morning’s trend of unsurprising qualifying offer decisions, Dodgers stars Kenley Jansen and Justin Turner will reject the team’s qualifying offer, per FanRag’s Jon Heyman (Twitter links). Andy McCullough of the L.A. Times tweeted as much at the time that each QO was extended in the first place. Each of the two should find at least a four-year deal on the free-agent market, and we pegged the them both for five-year contracts when ranking them in the top five on our list of the top 50 free agents. 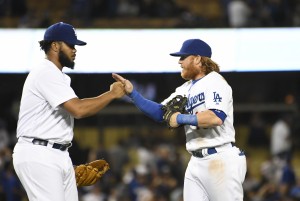 The 29-year-old Jansen logged a brilliant 1.83 ERA with 13.6 K/9, 1.4 BB/9 and a 30 percent ground-ball rate in 2016. Since making his big league debut at the age of 22, the converted minor league catcher has never posted a single-season ERA greater than 2.85, nor has he averaged fewer than 13 strikeouts per nine innings. Over the past four years, Jansen has a 2.19 ERA with a ridiculous 396-to-56 K/BB ratio in 263 innings of work. He potentially added to his value with a Herculean postseason performance for the Dodgers, recovering from an early hiccup to turn in three appearances of two shutout innings or more. Jansen threw 51 pitches in 2 1/3 scoreless innings in the decisive Game 5 of the NLDS, registering a hold that set up Clayton Kershaw’s memorable save. In Game 6 of the NLCS, he fired three perfect innings of relief with four strikeouts in a losing effort. That demonstration of his ability to work multiple innings effectively in the highest-leverage spots possible makes him all the more appealing as a free agent.

Turner, meanwhile, has blossomed into a superstar-caliber talent in three years with the Dodgers after being non-tendered by the Mets and signing a minor league deal in L.A. The 31-year-old (32 next week) has batted .296/.364/.492 in his three seasons with the Dodgers, demonstrating improved power in each year, which culminated with a career-high 27 homers in 2016. That impressive total was accompanied by 34 doubles and three triples, giving him 64 extra-base hits in 622 plate appearances. Turner also registered elite defense at third base this year, according to both Defensive Runs Saved (+7) and Ultimate Zone Rating (+14) in 1224 innings at the hot corner. Although he’s a bit older than the typical free-agent position player, a four-year deal seems easily attainable, and five years is possible for Turner. Ben Zobrist, after all, inked a four-year, $56MM deal last offseason that began with his age-35 season, and Turner’s age-35 season would be the fourth year of a theoretical multi-year pact.

The Dodgers have reportedly been in contact with both Jansen and Turner about new contracts already, though the Giants, Yankees, Cubs and Nationals are all expected to be in the mix for Jansen this offseason as well. The Dodgers will collect a compensatory draft pick at the end of the first round next year if either signs with a new team and a pair of picks if both sign elsewhere.