The Rays have acquired reliever Sergio Romo and cash considerations from the Dodgers for cash or a player to be named later, per an announcement from Los Angeles. 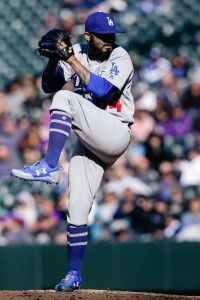 After an excellent stint with the Giants from 2008-16, Romo drew offseason interest from the Rays before heading to LA on a one-year, $3MM deal. Staying in the National League West didn’t go well for the 34-year-old Romo, who pitched to a 6.12 ERA (with a less-than-encouraging 5.75 FIP) in 25 innings as a Dodger. He also posted a career-worst walk rate (4.32 per nine) and yielded home runs on 26.9 percent of fly balls – an enormous increase over his 13.9 percent mark from last season. As a result, the Dodgers designated Romo for assignment on Thursday.

Given his woes this year, Romo hardly looks like a cure-all for the Rays, who have been in the market for relief help leading up to the July 31 non-waiver trade deadline. Still, he’s a low-cost pickup who did show some promising signs as a Dodger. Romo struck out 28.7 percent of batters in LA, matching his career mark, logged a 14.8 percent swinging-strike rate that betters his lifetime figure (14.2) and helped offset a low ground-ball rate (35.4 percent) by inducing pop-ups with regularity. At 15.4 percent, Romo’s infield fly rate places him among the majors’ upper echelon when it comes to relievers.

Even with Romo on hand, it stands to reason the Rays will continue to scour the market for relief upgrades over the next week-plus. While the 51-47 club is 1.5 games up on a wild-card spot, Tampa Bay’s success hasn’t come because of its bullpen. Rays relievers entered Saturday 22nd in the majors in ERA (4.37) and 23rd in fWAR (1.4), though the now-departed duo of Danny Farquhar and Jumbo Diaz contributed heavily to those unremarkable numbers before the team jettisoned them in recent weeks. The right-handed Romo hasn’t been any better this year, and he’ll now look to bounce back among a relief corps that includes more stable righty options in Alex Colome, Chase Whitley, Brad Boxberger, Tommy Hunter and Erasmo Ramirez.