Dec. 16: Jon Heyman of FanRag Sports tweets a breakdown of Gregerson’s contract. The reliever is guaranteed $5MM in both 2018 and 2019, with a vesting option for 2020 that requires him to appear in either 60 games in 2019 or 130 games total in 2018 and 2019 combined. It also appears as though he must be healthy for the option to vest on the latter condition. Gregerson can earn up to $1MM in incentives.

Dec 10: The Cardinals and free agent reliever Luke Gregerson have agreed to a two-year, $11MM contract with an option, Ken Rosenthal of The Athletic reports (via Twitter). It’ll be a $5MM club option or a $6MM vesting option (with a $1MM buyout), Bob Nightengale of USA Today tweets. The option will vest at 60 games in 2019 or 130 games from 2018-19, Nightengale adds. He’ll make $5MM in both guaranteed years of the pact, per Ken Davidoff of the New York Post (Twitter link). 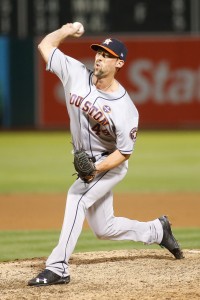 The deal is pending a physical, which Gregerson will take Tuesday, according to Derrick Goold of the St. Louis Post-Dispatch (Twitter link). Gregerson is an O’Connell Sports Management client.

This will be the second stint with the St. Louis organization for the right-handed Gregerson, whom the Cardinals selected in the 28th round of the 2006 draft. Gregerson never got past the Double-A level during his first go-around with the franchise, though, as the Redbirds traded him to the Padres in 2009 in a deal involving shortstop Khalil Greene.

Gregerson made his major league debut the same year of the trade and quickly became a highly effective member of the Padres’ bullpen. He stuck with the Friars through 2013 before pitching for the Athletics (2014) and Astros (2015-17). Although the 33-year-old Gregerson has never been a hard thrower, he has nonetheless registered excellent numbers across 599 innings, with a 3.02 ERA, 9.12 K/9, 2.55 BB/9 and a 50.9 percent groundball rate. Gregerson has been quite durable along the way, having never pitched fewer than 55 2/3 frames in any season, and he brings experience as a setup man and a closer.

Although Gregerson is coming off a season in which he recorded a career-worst 4.57 ERA as a member of the title-winning Astros, his year wasn’t devoid of positives. With 61 innings, he eclipsed the 60-frame mark for the sixth time. Gregerson also continued to put up appealing strikeout, walk and groundball numbers (10.33, 2.95 and 50.0 in those respective categories), and he notched the third-highest swinging-strike rate of his career (15.6 percent).

If the career-worst home run-to-fly ball rate (23.6 percent) Gregerson logged in 2017 proves to be an aberration, he should be a quality piece for a Cards bullpen in need of aid. With Trevor Rosenthal, Seung Hwan Oh, Juan Nicasio and Zach Duke currently on the open market, St. Louis has been on the lookout for relief help since last season concluded. Gregerson may be the first of multiple pickups this offseason for the club’s bullpen, and he’s clearly the most established member of a group that includes a few solid holdovers in Brett Cecil, Tyler Lyons, Matthew Bowman, Sam Tuivailala and John Brebbia.