Dec. 15: The Rockies have formally announced the signing of Shaw to a three-year deal.

Dec. 12: The Rockies have agreed to a deal with free agent righty Bryan Shaw, Jon Heyman of FanRag Sports reports (Twitter link).  Joel Sherman of the New York Post reported earlier tonight (Twitter links) that talks between the two sides are “advanced” and “nearly done.”  The deal is a three-year contract that will pay Shaw in the area of $9MM per season, according to ESPN.com’s Buster Olney, who also tweeted earlier today that teams believed Shaw and fellow right-hander Tommy Hunter already had agreements in place.  Shaw is a client of Rowley Sports Management. 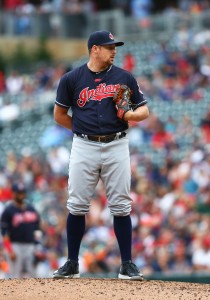 Shaw has posted strong numbers during his seven seasons with the D’Backs and Indians, with a career 3.13 ERA, 2.64 K/BB rate and 8.0 K/9 over 446 1/3 relief innings.  The durable righty has never spent any time on the disabled list and leads all pitchers with 442 appearances between 2013-17.  He owns a 50.6% career ground ball rate, which will serve him well at Coors Field, though Shaw has also been known to have been hurt by the home run ball.  His 0.6 HR/9 in 2017 was his lowest such number in the last four seasons, however.

Shaw has 11 saves in his career but has never really worked as a closer, rather primarily serving as Cody Allen’s setup man in Cleveland.  It would seem as if the Rockies may also intend to use Shaw in a setup role, as the team has been connected to such established closers as Wade Davis and former Rockie Greg Holland on the rumor mill.  Bullpen reinforcement was a stated goal for Colorado this winter, with Holland, Pat Neshek (who has signed with the Phillies), and Jake McGee all hitting the free agent market.

Several teams had interest in Shaw this winter, and he was weighing multiple three-year offers, including one from the Mets.  Newsday’s Marc Carig recently speculated that Shaw could have waiting to see if he landed a deal from a team (like the Rockies) that holds its Spring Training in Arizona, where Shaw and his family have a home.

MLB Trade Rumors ranked Shaw 25th on our list of the winter’s Top 50 Free Agents, predicting him for a three-year deal worth $21MM.  Landing a deal with a rough average annual value of $9MM is a nice get for Shaw’s representatives, and another sign of how heavily teams are valuing relief pitching this winter.  Neshek’s two-year deal with the Phillies guarantees him $16.25MM, while Brandon Morrow found two years and $21MM from the Cubs and Luke Gregerson two years and $11MM from the Cardinals.