The Reds announced that they’ve signed right-handed reliever Jared Hughes to a two-year contract with a club option for the 2020 season as well. Hughes, who was non-tendered by the division-rival Brewers earlier this month, is a client of SSG Baseball. 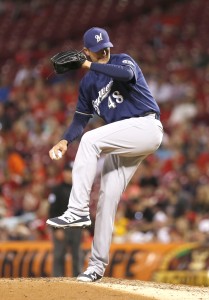 SB Nation’s Chris Cotillo reports that it’s a two-year, $4.5MM contract for Hughes, who will earn $2.125MM in both 2018 and 2019 (Twitter links). The club option is valued at $3MM and comes with a $250K buyout, per Cotillo, who also notes that Hughes can earn up to $750K worth of incentives based on appearances in each year of the contract (including the option year, if exercised). Hughes would take home $100K for reaching 25, 30, 35, 40, 45 and 50 games pitched, and he’ll earn $75K for reaching 55 and 60 appearances as well. For a reliever that has averaged 68 appearances per year over the past four seasons, those incentive packages are highly attainable.

Hughes, 32, has long posted solid run-prevention numbers in the NL Central, combining for 250 1/3 innings of 2.55 ERA ball across four seasons between the Pirates and Brewers from 2014-17. He’s also consistently shown a knack for inducing ground-balls (career 61.2 percent), but a lack of strikeouts has seemingly limited Hughes’ earning potential in recent years.

Hughes has averaged just 5.5 K/9 across the past four seasons and, in addition to being non-tendered by the Brewers, was released by the Pirates in Spring Training 2016. However, a fastball that averaged nearly 94 mph this past season and a healthy swinging-strike rate of 11.6 percent suggest that perhaps he can maintain the improved 7.2 K/9 clip he posted in ’17. Then again, the 2017 season also saw Hughes allow a career-worst 36.7 percent hard-contact rate, which contributed to a respectable but unspectacular .318 wOBA from opposing hitters (though that number was directly in line with expectations based on his batted-ball profile, per Statcast). Certainly, based on today’s contract, the Reds seem to place a higher value on Hughes’ skill set than their two division rivals that have cut Hughes loose over the past two years.

Raisel Iglesias is entrenched in the closer’s role in Cincinnati, but Hughes will join a setup corps that also included right-hander Michael Lorenzen and left-hander Wandy Peralta. Several of Cincinnati’s late-inning spots remain up for grabs, but Hughes seems likely to lock down one of those spots for the foreseeable future.