The Rockies have officially agreed to a contract with free-agent closer Wade Davis, as Jeff Passan of Yahoo Sports first reprted. Davis, a client of Jet Sports Management, receives a three-year, $52MM contract that includes a vesting player option for a fourth season which could take the deal’s value to $66MM over four years. That contract’s $17.33MM annual value is a record among relievers, Passan notes. 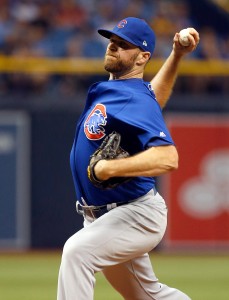 The fourth-year option, worth $15MM, will vest as a player option for the 2021 season if Davis finishes 30 games in 2020. If it does not vest, it’ll instead be a mutual option with a $1MM buyout, per Passan. Joel Sherman of the New York Post reports (via Twitter) that Davis will earn $16MM in 2018, $18MM in 2019 and $17MM in 2020. FanRag’s Jon Heyman tweets that Davis’s deal includes a $1MM assignment bonus if he is traded, adding that he’ll also pick up full no-trade rights after being traded once.

The addition of Davis seems likely to end the Rockies’ pursuit of a reunion with 2017 closer Greg Holland, who declined a $15MM player option and rejected a $17.4MM qualifying offer following the season. Davis, too, rejected a qualifying offer, meaning he’ll cost the Rockies a pick in the 2018 draft.

As a team that benefited from revenue sharing and did not exceed the luxury tax in 2017, the Rockies will forfeit their third-highest selection in next year’s draft. For the Rockies, who have a selection in Competitive Balance Round A, their third-highest pick will be their second-round selection in 2018. The Cubs, meanwhile, will secure a compensatory pick after Competitive Balance Round B. (While Davis’ contract is north of $50MM, the Cubs are a revenue sharing payor, thus disqualifying them for compensation after the first round of the draft.)

Colorado has clearly identified the bullpen as an area of focus this offseason, as they’ve now dished out more than $100MM worth of guarantees in the form of Davis’ $52MM and the respective three-year, $27MM deals given to lefty Jake McGee and right-hander Bryan Shaw. That continues the aggressive bullpen spending the team began last winter when signing Mike Dunn and Holland in free agency.

Davis, of course, will capably step into the void left by Holland’s departure and could very well serve as an upgrade. In 58 2/3 innings with the Cubs last year, Davis pitched to a 2.30 ERA with 12.1 K/9, 4.3 BB/9 and a 40.5 percent ground-ball rate while collecting 32 saves. Those excellent run-prevention numbers continued an impressive run of dominance for Davis, who owns a 1.45 ERA in 241 1/3 innings since converting to a reliever on a full-time basis in 2014.

The 2017 season wasn’t without red flags, though. Davis’ 40.5 percent grounder rate marked a significant drop-off from the 48.5 percent clip he posted in 2016, and his 94.3 mph average fastball velocity was his lowest since moving to the bullpen. That velocity drop is all the more troubling when juxtaposed with a 2016 season in which Davis landed on the disabled list with a forearm strain.

There’s risk in any long-term deal for a reliever, though, and the Rockies’ aggressive spending in this market has demonstrated less aversion to those perils than most clubs throughout the league. For a Colorado team that features a very young and largely inexperienced rotation, the stockpiling of quality relief arms will help manager Bud Black to lessen the workload of his young arms by leaning more heavily on a group of experienced late-inning options.

Of course, it’s worth bearing in mind that the three additions won’t necessarily enhance the Rockies’ 2018 unit beyond the one it possessed in the season prior. By the end of the season, the relief corps included Holland, McGee, and midseason trade acquisition Pat Neshek. At a minimum, though, the organization can likely now anticipate that it’ll enter the coming season with a relief group that’s as good or better than its productive ’17 outfit.