The Blue Jays have acquired infielder Yangervis Solarte from the Padres in exchange for two prospects – outfielder Edward Olivares and reliever Jared Carkuff – per announcements from both teams. 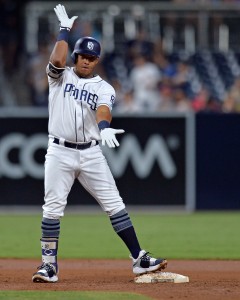 The 30-year-old Solarte is the second infielder the Blue Jays have landed via trade this winter, joining Aledmys Diaz, whom they acquired from the Cardinals last month. The area was a clear point of emphasis for Jays entering the offseason, given that neither second baseman Devon Travis nor shortstop Troy Tulowitzki have been able to stay consistently healthy during their careers. Solarte may end up as a multiyear piece for Toronto, as he’ll make an affordable $4MM in 2018 before the club will have to decide on options totaling $13.5MM over the next two offseasons.

Solarte brings experience at all four infield positions, with the majority of his work having come at third base. He’s unlikely to see much action there next season, however, unless the Jays trade superstar Josh Donaldson between now and the summer or Donaldson misses time with injuries. Solarte spent the majority of last year at second base, where he has posted minus-3 Defensive Runs Saved and a minus-1.1 Ultimate Zone Rating across just over 1,000 career innings, and that figures to be his primary position in 2018.

This trade brings an end to a decent tenure in San Diego for Solarte, whom the Padres acquired from the Yankees for third baseman Chase Headley in 2014. Solarte had been an oft-speculated trade piece over the past couple years, and with Headley having returned to the team in a deal with the Yankees this winter and shortstop Freddy Galvis also now in the mix after a swap with the Phillies, the Padres had a glut of infielders. As a result, they’d been shopping Solarte, whose exit leaves the Pads with Headley, Carlos Asuaje, Cory Spangenberg and Christian Villanueva among their current third/second base options (though Headley may be on his way out soon).

In Olivares, the Padres are getting a soon-to-be 22-year-old whom MLB.com ranked as the Blue Jays’ 18th-best prospect. The outlet notes that Olivares, a Venezuelan who signed with the Jays as an international free agent in 2014, “began to tap into his above-average raw power” last season, when he batted .277/.330/.500 with 17 homers in 464 Single-A plate trips, and has further potential on that front. He also possesses “well above-average speed” and the ability to play all three outfield positions. That skillset could make Olivares a major league regular down the line, per MLB.com.

Jeff Passan of Yahoo Sports reported that Solarte was headed to the Jays. Robert Murray of FanRag reported the Padres would get Olivares. Dennis Lin of the San Diego Union-Tribune reported the Pads would receive Carkuff (all Twitter links). Photo courtesy of USA Today Sports Images.