2:37pm: The deal has been announced by the Phillies. They’ve designated infielder Trevor Plouffe for assignment to open space on the roster.

2:21pm: The Blue Jays have traded left-handed reliever Aaron Loup to the Phillies for a prospect, reports Ben Nicholson-Smith of Sportsnet (via Twitter). Pitching prospect Jacob Waguespack is headed back to the Blue Jays in return, tweets Mark Feinsand of MLB.com. 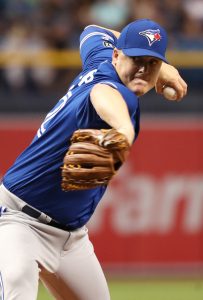 The acquisition of Loup represents the third proven veteran pickup in recent days for the Phillies, who lead the NL East by half a game and have also landed infielder Asdrubal Cabrera and catcher Wilson Ramos leading up to the trade deadline. On paper, Loup isn’t as exciting an addition as those two, though the 30-year-old has typically performed well since debuting with Toronto in 2012. This season hasn’t gone all that well for Loup, however, as he has recorded a 4.54 ERA and his second-lowest groundball rate (a still-respectable 46.7 percent) in 35 2/3 innings. On the other hand, Loup has posted 10.6 K/9 against 3.28 BB/9, logged personal-high percent swinging-strike (12.3) and infield fly percentages (12.1), and registered a 3.61 FIP.

Loup may prove to be a worthy add for the Phillies, whose bullpen ranks 18th in the majors in ERA and a much better ninth in fWAR. Regardless, he’s a pending free agent on a cheap salary ($1,812,500), making him a logical player for the out-of-c0ntention Jays to sell. As you’d expect, though, Loup didn’t carry a ton of trade value, and Toronto wasn’t able to acquire one of MLB.com’s 30 best Phillies prospects in return. Instead, they landed Waguepsack, a 37th-round pick in 2012 who has seen his first Triple-A action this season. The 24-year-old was a mixed bag as a member of the Lehigh Valley club, with which he put together a 5.06 ERA/3.66 FIP with 8.1 K/9, 3.38 BB/9 and a 51.9 percent grounder rate in 53 1/3 innings (14 appearances, eight starts).