5:28pm: The Royals are covering about half of Duda’s remaining salary, tweets David O’Brien of The Athletic.

4:45pm: The Royals and Braves have both announced the move.

4:19pm: The Royals have traded first baseman Lucas Duda to the Braves in exchange for cash, reports Jeffrey Flanagan of MLB.com (via Twitter). He reportedly cleared revocable trade waivers earlier this month and recently ranked 17th on MLBTR’s list of the top 20 remaining August trade candidates. The teams have not yet formally announced the move. 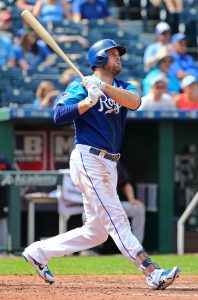 Duda, 32, will give the Braves some left-handed punch off the bench over the final five weeks of the regular season and, the team hopes, into the playoffs. While he hasn’t had a strong overall season, hitting just .242/.311/.415 on the year, those pedestrian numbers are in some part due to the fact that the Royals have played him against left-handed pitching far more than his track record against southpaws should dictate. Duda has taken 30 percent of his plate appearances against left-handed opponents in 2018 and, unsurprisingly, struggled at a .180/.255/.258 clip.

However, in 239 plate appearances while holding the platoon advantage, Duda has been a vastly superior hitter. He’s hit righties at a .267/.335/.479 clip, swatting 11 of his 13 homers and 11 of his 12 doubles in those matchups. Atlanta had reportedly already attempted to claim Matt Adams from the Nationals to fill a similar role, but the Cardinals had waiver priority over Atlanta and wound up acquiring him instead.

Duda signed a one-year deal with Kansas City this past offseason and is playing the year on a $3.5MM base salary. He earned a $100K bonus for taking his 300th and 325th plate appearance this season, and he’ll take home an additional $100K for every 25th plate appearance he takes in 2018. Because of those incentives, that base salary has risen to $3.7MM and will soon be bumped to $3.8MM, but with a presumably limited role on the horizon in Atlanta, he’s not likely to unlock much more of that incentives package.

Atlanta has been a middle-of-the-pack offense against right-handed pitching to this point in the season, hitting .256/.321/.413 — good for a 96 wRC+ that is tied for the 16th-best mark in baseball. Duda will give them some additional thump to use in those matchups in late-game settings and will instantly become the team’s best left-handed option off the bench. Prior to the trade, Rio Ruiz was the team’s lone lefty on the bench.